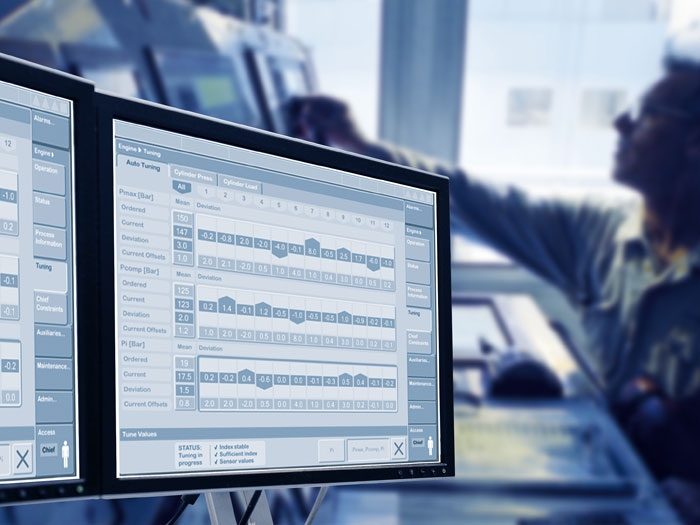 PMI Autotuning system automatically adjusts the pressure in the combustion chambers of an engine’s cylinders for optimal running. A screen shot from the PMI Autotuning user interface

The MSC Filippa, a 2011-built, 13,400 TEU containership owned by Germany’s Peter Döhle Group, will be retrofitted to accommodate the system.

“The main driver for us in ordering PMI Auto-tuning was to reduce fuel consumption and therefore become more attractive to the charter market,” said Hagen Koslowski, Technical Director of Peter Döhle Schiffahrts-KG. “Taking a broader view, the CO2 reduction and our environmental responsibility, paired with our trust in MAN products, also played key roles in the decision.”

The Peter Döhle Group has previous experience with PMI Auto-tuning, having recently installed it aboard a series of three 6,800 TEU vessels equipped with MAN B&W 10K98MEC-7 low-speed engines.

“On all our vessels, the system runs reliably,” said Mr. Koslowski. “The PMI works really well and adjustments can be seen on the CoCoS computer and MOP, while engine parameters are always at the optimal value.”

He also praised an “outstanding performance” by MAN PrimeServ’s service engineers who installed, commissioned and pre-adjusted the PMI Auto-tuning system aboard the containerships.

“With the PMI system in place,” he said, “we observed an SFOC drop on our engines using Bluetraker performance monitoring. In the long term, our main expectations are extended TBOs and a smaller workload for our crews as engine performance will be permanently, automatically optimized.”

PMI Autotuning measures the pressure in a cylinder’s combustion chamber through online sensors. These automatically send signals in real time and the data is used to automatically adjust the cylinders for optimal performance. The system replaces the older PMI Offline and Online systems.

A 3D rendering of a cylinder/combustion chamber

“We introduced our first PMI Autotuning system in 2010 as a result of the possibilities arising from the launch of MAN Diesel & Turbo’s electronic ME-engines in 2005,” said Christian Ludwig – Head of Retrofit & Upgrade – MAN Diesel & Turbo. “The strong sales performance of our Autotuning package shows how successfully the market has taken to it. So much so, in fact, that we recently decided to make it standard on our newbuilding engines.”

MAN PrimeServ reports that many owners of newbuilding engines that have featured PMI Autotuning as standard have been motivated to retrofit the rest of their fleet with the system after seeing its effectiveness.

Mr. Ludwig says that the next development in PMI Autotuning is “PMI VIT” for MC engines.

“With PMI VIT,” said Mr. Ludwig, “we are addressing our sizable, mechanical MC-portfolio of engines and aiming to emulate that which PMI Autotuning has achieved with electronic engines.”