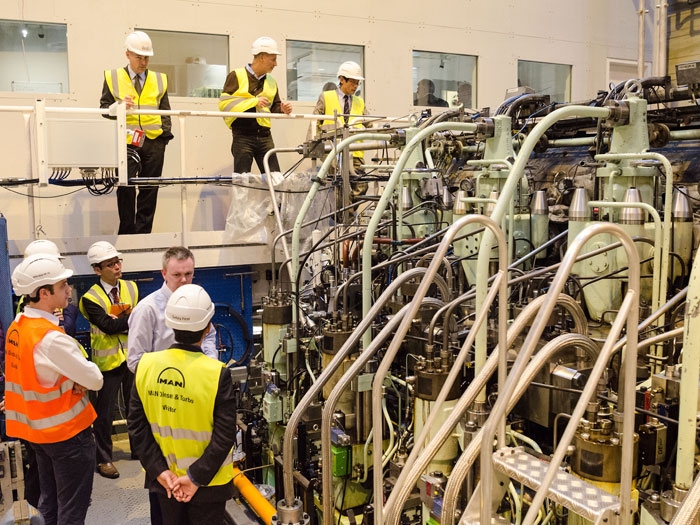 The ME-LGI engine pictured at the demonstration in Copenhagen

For the purposes of the event, the company rebuilt its 50MX test engine to a methanol capable ME-LGI unit.

“Attendees showed great interest in the demonstration and the accompanying technical presentations; their feedback has been very positive,” said Vice President and Head of R&D, Søren H. Jensen.

“A number of years ago,” he continued, “we identified the need to develop an engine that could run on more environmentally-friendly, competitively-priced fuels as an alternative to MDO/MGO. We believe the ability of the ME-LGI engine to run on sulfur-free fuels offers great potential. Methanol carriers have already operated at sea for many years. With a viable, convenient and economic fuel already on-board, exploiting a fraction of the cargo to power a vessel makes sense.”

To date, MAN Diesel & Turbo has received orders for seven ME-LGI engines – a mixture of 7S50ME-LGI and 6G50ME-LGI variants – from Mitsui O.S.K. Lines, Marinvest and Westfal-Larsen.

MAN Diesel & Turbo is already working towards a Tier-III-compatible ME-LGI version that can meet IMO NOx limits with the aid of secondary measures.

Methanol as a ship fuel is interesting for ship operators because it does not contain sulfur and is liquid in ambient air conditions, which makes it easy to store aboard ships. For ships operating in IMO Emission Control Areas (ECAs), methanol is a solution to the demands of sulfur-emission legislation.

A further advantage of methanol is its ability to be stored in normal, unpressurized tanks, making it straightforward to transport. As delivery by train, truck and/or ship is already in place in many areas globally, establishing and expanding the existing methanol infrastructure is perfectly feasible, even for individual ships operating in remote areas.

In contrast to the ME-GI engine, where fuel is injected in its gaseous phase, the MAN B&W ME-LGI engine is the dual-fuel solution for low-flashpoint liquid fuels.

The ME-LGI design successfully overcomes the challenge of low-cetane-number fuels – such as methanol – whose self-ignition quality is characteristically poor, using the well-known ME-GI principle of pilot injection of MGO or HFO.

The ME-LGI’s operation principle and safety concept are similar to those of the already accepted ME-GI concept. Fuel injection is accomplished by a Fuel Booster Injection Valve (FBIV), using 300 bar of hydraulic power to raise the fuel pressure to an injection pressure of some 600 bar.