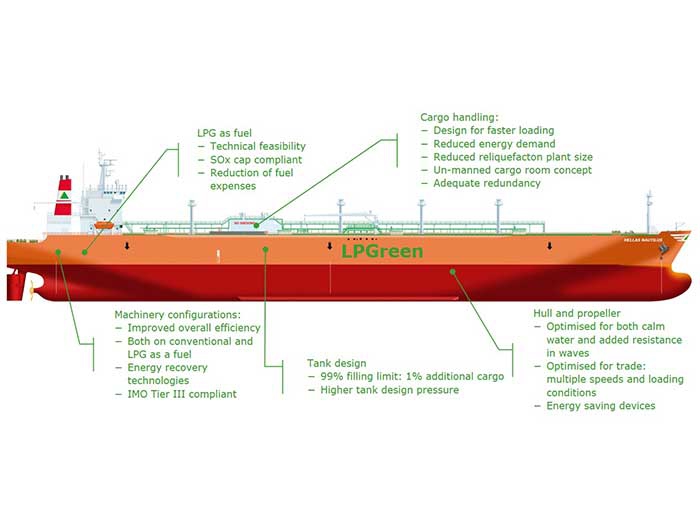 APRIL 5, 2017 —The results of a joint industry project (JIP) to develop a new LPG-fueled LPG carrier design were unveiled at this week’s Gastech 2017 event in Tokyo.

The JIP has resulted in a new concept design that achieves state of the art performance on several fronts. Compared to the reference vessel, a high specification standard design vessel built in 2016, there is an overall improvement of 6–9% in energy efficiency, depending on machinery configuration and fuel used. A redesign of the tank allows for a filling limit of 99% – a 1% increase in overall carrying capacity. Loading duration has been decreased by 30%, while the newly designed cargo handling system concept results in a 5% reduction in energy demand.

“Perhaps most importantly, LPGreen has demonstrated the technical feasibility of an LPG fueled propulsion concept, which, depending on fuel prices and the development of a commercial and chartering framework, could result in a cut of up to 30% in fuel expenses,” says George Dimopoulos, Principal Specialist in DNV GL and project manager for LPGreen.

To realize these gains, the partners utilized advanced computer analysis tools. Hull form optimization both in calm water and waves was conducted using HHI’s and DNV GL’s CFD hydrodynamic optimisation codes. The overall concept system evaluation and optimization was conducted using DNV GL’s COSSMOS modeling framework, which allowed for an integrated analytical approach to the evaluation of all machinery technology options and design improvements considered. Finally, every technology feature was compared against the performance of an existing, new (2016), and very modern LPG carrier from CMM’s fleet, which gave a solid basis for documenting improvements.