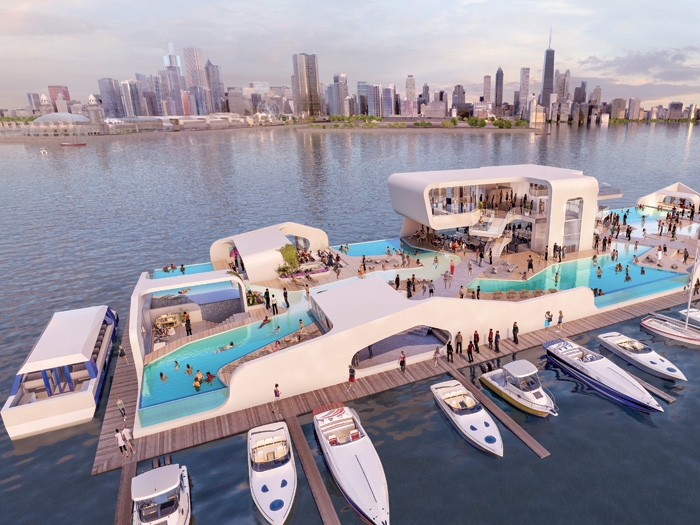 Breakwater Chicago will be the first-of-its-kind floating island

And for those wondering how Breakwater Chicago will deal with the region’s harsh winter weather, the company plans to have the Breakwater Chicago tugged in and attached to the shore. This, assures D’Arcy, will enable guests to walk directly on and off the island while the lake is frozen. He adds, “The entire vessel will then be enclosed in a clear dome, thus allowing our venue to continue providing a summer-like experience even when the outdoor temperatures plummet below freezing. Inside the dome, guests will be able to lay out at our pools, work on their suntans, enjoy a beverage and the beautiful view, and feel like they've escaped from the "Chiberian" winter, even if just for a short time. As crazy as this sounds, similar dome materials and construction have been installed on the new football stadium for the Minnesota Vikings and several other NFL stadiums have similar plans in progress.”

The goal for Breakwater is: to design, build and operate the vessel in the “most efficient, sustainable, and environmentally friendly manner possible.” To that end, the company has called upon project management firm Projx Construction Group and has asked Seattle-based Elliott Bay Design Group to lead its naval engineering team. EBDG Project Manager Mike Complita, PE says the project is a unique and fun one, with a great customer. “We are enjoying the dynamic and creative nature of this project," he adds.

October 13, 2015 — Chicago will be home to the world’s first floating island, the Breakwater Chicago (Extended coverage from Marine Log’s October 2015 issue). Over the course of 239 years the United States has been at the forefront of technology and innovations. That entrepreneurial spirit is one that led to the creation of the transcontinental railroad system, the formation of the assembly line (created by Ford), and even the iPhone. That spirit is once again on display in Chicago where Beau D’Arcy, Breakwater Chicago’s Co-Founder and President is bringing his dream of creating a “Catalina” in Chicago to fruition.