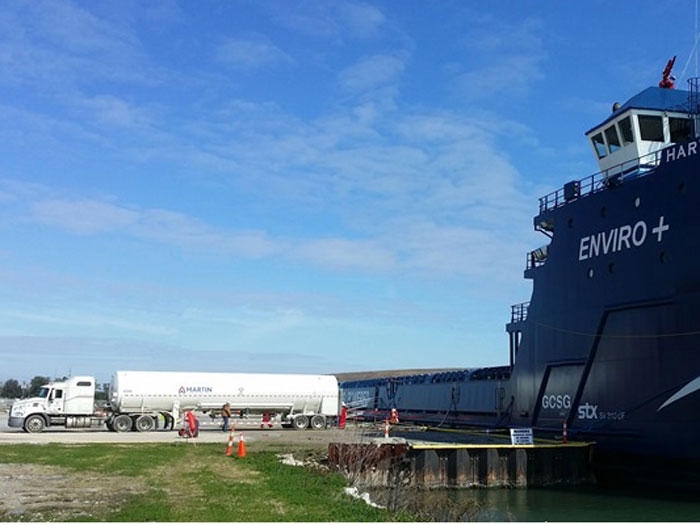 April 2, 2015 – When Harvey Gulf International Marine made maritime history by becoming the OSV owner/operator to bunker LNG as a marine fuel in North America, USMRC (the United States Maritime Resource Center), Middletown, R.I., had an important part in the success of the operation.

According to Chad Verret, Harvey Gulf’s Executive VP– Alaska and LNG Operations, USMRC through its Maritime Simulation Institute (MSI), was “a key contributor to this historical maritime event by virtue of the close working relationship we have with them for LNG fuels training.”

“The LNG bunkering course that USMRC provides to Harvey Gulf marine personnel is exceptional,” says Mr. Verret. “The innovative training ensures our mariners are prepared to the highest standards and enables our crew to play a critical role in the safe operations of our fleet.”

USMRC/MSI is the first organization in the U.S. to offer a five-day advanced training program for personnel serving on vessels using gas fuels who have direct responsibility for the care and use of LNG fuel and the gas fuel systems. The course pre-dates the establishment of U.S. Coast Guard regulations governing LNG bunkering, and even the release of policy guidance letters.

USMRC is also in the final stages of developing a basic LNG fuels course for other mariners working aboard these vessels who have designated safety and emergency response duties associated with the handling of LNG marine fuels.

“USMRC’s LNG Bunkering PIC (Person in Charge) course is unique in that it offers practical demonstrations, exercises and assessments using a high fidelity LNG bunkering system simulation tool based on the Wärtsilä LNGPac system,” said USMRC President Brian T. Holden. “This is the same system that will be installed on Harvey Gulf’s LNG fueled vessels.”

Another practical component of the course is that students also must complete a full day of LNG emergency response and firefighting course at the Massachusetts Firefighting Academy. Participants don a complete fireman’s outfit and employ various techniques for vapor control and fire extinguishing using actual LNG cryogenic material in intensive scenarios, including LNG pool and flange fires.

“The hands-on parts of the LNG bunkering training at USMRC provide a true test for our mariners under a range of normal, unusual and emergency operating conditions – they really have to prove themselves,” Mr. Verret said. “USMRC is clearly at the forefront of LNG bunkering training. There is no other course like this in the Americas and it already meets or exceeds current guidance from the U.S. Coast Guard and the draft IMO standards.”