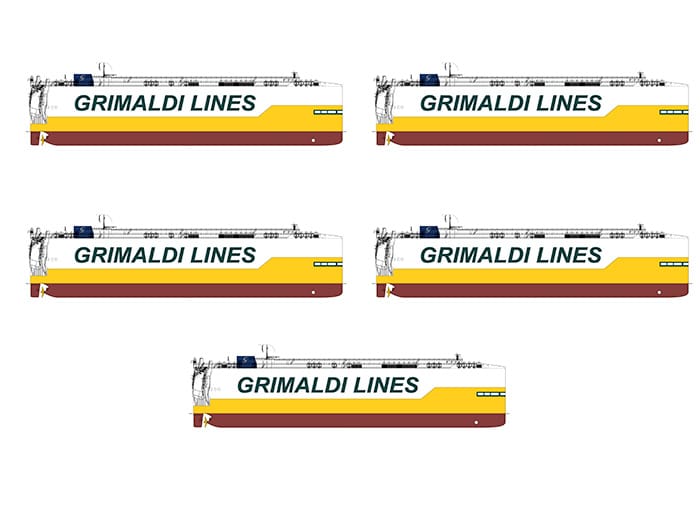 Grimaldi says its latest order testifies to its trust in the growth of the global automotive industry, and notably the electric car segment.

The Naples-headquartered Grimaldi Group is going all in on car carriers — and ammonia-readiness. It has opened the new year by placing an order for five 9,000 CEU (Car Equivalent Unit) pure car & truck carriers (PCTCs) at two China State Shipbuilding Corporation Limited (CSSC) shipyards: Shanghai Waigaoqiao Shipbuilding Company Limited and China Shipbuilding Trading Company Limited (CSTC). The order includes options for another two units, which would bring the total investment to over $630 million. Deliveries are expected between 2025 and 2026

Grimaldi says its latest order “testifies to the company’s trust in the growth of the global automotive industry, and notably of the electric car segment.”

With a length of 200 meters and a width of 38 meters, the ships will be among the first to be equipped with what Grimaldi says is “a new type of electronic engine whose specific consumption is one of the lowest in its category.” They will also have the RINA (Italian Naval Register) ammonia-ready class notation, and will be designed for cold ironing where shoreside electricity is available.

The vessels ordered represent an evolution of the 6,700 CEU car carriers delivered to Grimaldi between 2016 and 2018 and give a 27% reduction in CO2 emissions per cargo unit transported compared with the previous generation ships.

The new order comes just over two months after Grimaldi placed an order for five similarly sized ammonia-ready PCTCs at China Merchants Heavy Industries Jiangsu. That agreement includes an option for an additional five units, which would take its total value to about $1 billion/