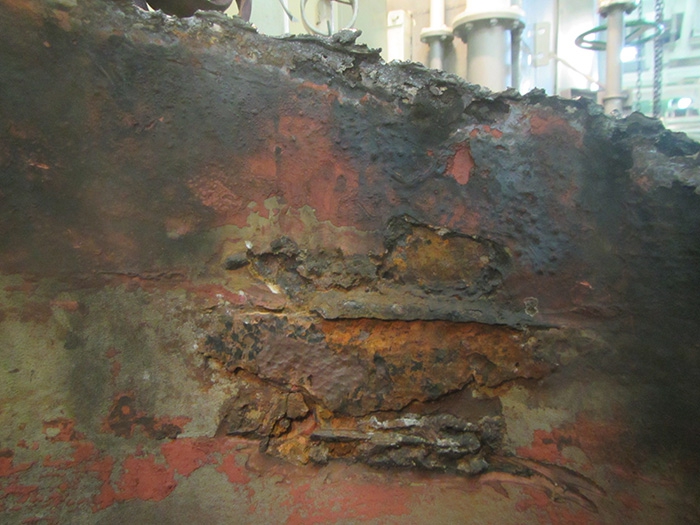 FEBRUARY 15, 2018 — Underwater repair specialist Hydrex has been carrying out an increasing number of repairs to the pipe work and overboard outlets of ships equipped with exhaust gas scrubbers.

Diver/technicians from Hydrex recently carried out pipe replacements on two 270 m shuttle tankers where the wash water from the “scrubbed” exhaust gases had corroded the pipework, resulting in water ingress. Repairs to the tankers were carried out while the vessels were alongside and remaining in operation.

“We have noted an increase in repairs to corroded pipework and outlets, which does appear to correspond with the increase in the number of ships fitted with scrubbers,” said Dave Bleyenberg, Hydrex Production Executive. “These systems remove harmful sulfur oxide compounds from the exhaust gasses of marine diesel engines burning high-sulfur heavy fuel oils. However, the resulting residue removed from these gases can have a rapid and highly corrosive effect on the scrubbers’ internal pipework and outlets.”

To repair corroded piping while vessels remain in-water and in service, Hydrex uses measurements taken during a preliminary inspection. The data is then used to fabricate a custom-made mobdock (flexible mobile mini-drydock). This is then transported to the repair site, where it is placed over the scrubber cooling pipe outlet to allow the repair work to be carried inside the vessel without further water ingress.

“With the first tanker, berthed in Rotterdam, working space was limited,” said Bleyenberg. “This meant that several of the frames around the pipe had to be removed before diver/technicians could cut away the corroded part of the old pipe. While the shell plating was prepared for the installation of the replacement pipe, a new diffuser and flange were fabricated on site. The replacement pipe was then positioned and secured with a full penetration weld, and the new diffuser installed. The welding was inspected by an independent tester using NDT (non-destructive testing) techniques.”

For protection of the new pipe against further corrosion, the internal surface was coated using Ecospeed, a highly chemical resistant coating product from Hydrex’s sister company Subsea Industries. “Taking into account the nature of the process taking place inside a scrubber, this is essential for a lasting protection of the pipe.”

After the success of this repair, Hydrex was contracted to carry out the same operation on the sister ship berthed at Skagen in Denmark. This vessel had experienced exactly the same problem.

“Corroded scrubber pipework and discharge outlets is a serious problem, and we’re seeing more and more of it,” said Bleyenberg. “Our divers are certified wet and dry welders as well as technicians, which allowed us to carry out the complete repair work on both of these shuttle tankers, including creating the new diffuser. By doing everything ourselves and on-site the tankers were able to remain on standby to mobilize when needed.”

The new diffuser alongside the corroded one