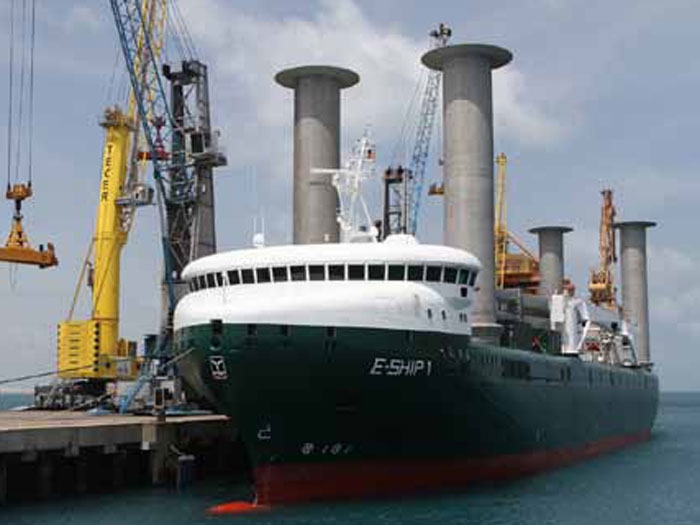 FEBRUARY 13, 2014 — German wind turbine manufacturers Enercon is bringing its 130.42 m diesel electric rotor ship E-Ship 1 back into service transporting wind turbines world wide. The vessel has been out of service for almost a year due to “repeated technical issues” with its diesel generators.

E-Ship-1 is primarily a conventional diesel electric vessel, however exhaust heat from its seven diesels powers a Siemens steam turbine that generates electricity used to spin its four 27 m high x 4 m diameter Flettner rotors. These use the Magnus effect, whereby a spinning cylinder in a moving airstream creates a lateral force perpendicular to the direction of the airstream which, when used on ships, propels the ship forward. Anton Flettner applied this principle successfully at the beginning of the 1920s with the experimental vessel Buckau.

Almost a century later, the Magnus effect is still working and, prior to being taken out of service, E-ship-1 had been shown to allow operational fuel savings of up to 25% compared to same-sized conventional freight vessels, though, in addition to the rotors, other innovations such as a streamlined Enercon-developed propeller and rudder  also contribute to significantly reducing fuel consumption.

Enercon has now replaced the ship’s original seven Mitsubishi diesel generators with units from another manufacturer (understood to be Caterpillar). At the same time, says Enercon, it took advantage of the dock time to optimize the E-Ship’s onboard technical system.

“The new engines and other improvements will make our ship’s diesel-electric system even more efficient and will contribute to further increasing energy efficiency and reducing fuel consumption,” says Enercon Managing Director Nicole Fritsch-Nehring.

During the ship’s next voyages, Enercon will be able to validate the drive concept. Performance monitoring will also be carried out from onshore and a weather routing system is  to be introduced to enable determination of the best course to take for optimum usage of the Flettner rotors in order to achieve maximum fuel savings.