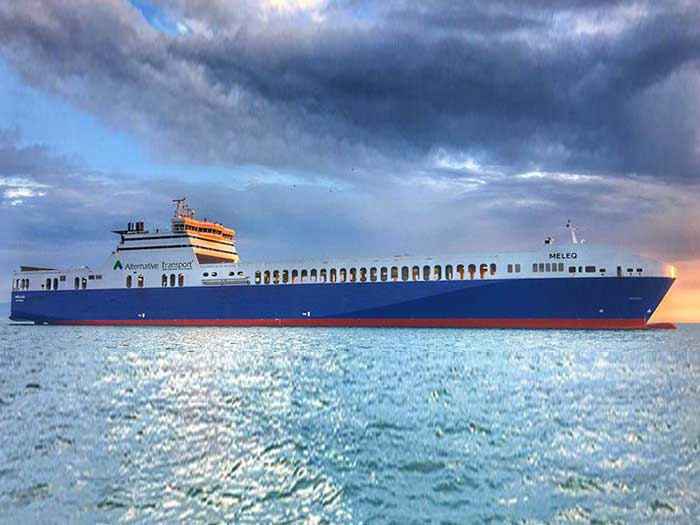 JULY 21, 2017 — The European Bank for Reconstruction and Development (EBRD) said today that it is providing an EUR 27.5 million to Turkish ship operator Alternative Transport that will help it realize its international potential to finance acquisition of a new EUR 55.5 million roll-on/roll-off (RO/RO) cargo ship.

In addition, an EUR 4.5 million junior loan will be provided under the EBRD’s Green Logistics Program, which is funded by the Global Environment Facility. Turkey’s largest lender Isbank is extending a parallel loan of EUR 16 million.

The ship, the Meleq, is one of two 207.9 m RO/RO vessels ordered last year at German shipbuilder Flensburger Schiffbau-Gesellschaft (FSG) by a subsidiary of its parent Siem Group for operation by Alternative Transport under a bareboat charter deal with a purchase obligation. According to the Equasis data base, it was delivered earlier this year and its registered owner is currently shown as FSG RORO Carriers Ltd., The sister ship, Fadiq, is set for delivery from FSG in 2018.

The EBRD says the ship will enable Alternative Transport’s much-needed expansion on the route connecting the Istanbul port of Haydarpasa and Trieste, Italy. The EBRD has previously financed the acquisition of the other three ships on this route.

Sue Barrett, EBRD Director for Transport, said: “Although the importance of RO/RO transportation between Europe and Turkey is increasing rapidly, shipping companies in Turkey suffer from scarce access to long-term financing. This is our second transaction with Alternative Transport, a truly international sea transport firm, as we believe shipping operations are not only a successful business but also support a cleaner, safer and more efficient transport system for the country’s booming trade.”