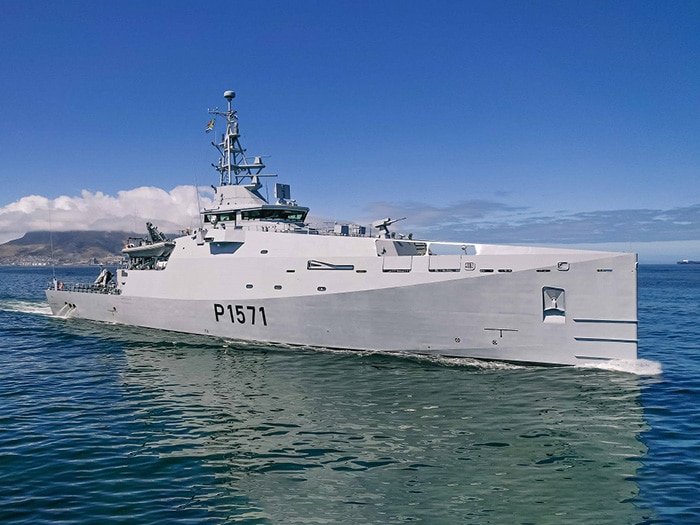 Patrol vessels in the new series are the first vessels built in South Africa to feature the Damen Sea Axe bow.

Damen Shipyards Cape Town has delivered the first of three state-of-the-art, multi mission inshore patrol vessels (MMIPVs) to the South African Navy. Handed over In a ceremony held at Simons Town Naval Base, the vessel marks the culmination of four years of work for the shipyard.

The 62 meters long by 11 meters beam vessel has been designed to deliver a rapid response capability that is both effective and cost efficient. It is the first Damen Sea Axe vessel to operate in South Africa where, along with its sister ships, its primary role will be to counter piracy, illegal fishing and smuggling operations.

The patrol vessels in the series can, at short notice, accommodate containerized mission modules that give them a true multi-mission capability. The patented design delivers exceptional seakeeping behavior. The straight-edged bow cuts through the water, improving comfort and safety while reducing emissions and fuel consumption.

The MMIPV project is also playing an important role in creating skilled new jobs and acting as a catalyst for the development of regional supply chains. On its own, the MMIPV project is expected to generate more than one million man-hours of work during the construction of the three MMIPVs and will support more than 1,000 direct and indirect jobs at Damen Shipyards Cape Town (DSCT). In addition, the yard is also focusing on nurturing small businesses to maximize local content.

“The delivery is a significant milestone in the story of Damen Shipyards Cape Town,” said Sam Montsi, chairman of the DSCT board. “It is the first time that a naval vessel of this caliber has been built at the yard and it is also the first of its class! Despite the COVID 19 pandemic, this beautiful vessel has been built to the required quality level. which is an achievement that was realized by South African people, as most of the work and materials that went into the construction were sourced locally.”

“The yard has significantly grown during this process both in the quality of work and the safety standards achieved. This project has also allowed the yard to increase the impact of its transformation strategy by consistently delivering relevant development to the communities of South Africa.”

Work on the remaining two vessels is well underway at DSCT, with handover of the second vessel being planned for 2023 withj the third set to follow in 2024.