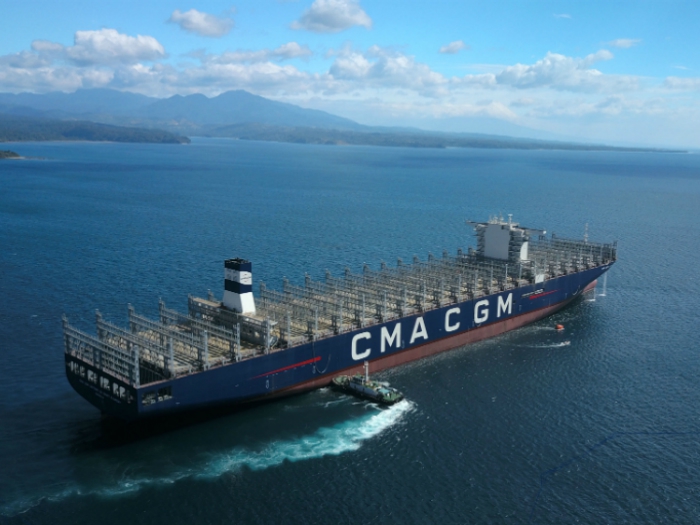 Built in the Philippines by HHI-Phil, the CMA CGM Antoine De Saint Exupery is the first of a trio of ULCVs

As the new flagship of CMA CGM’s fleet, the CMA CGM Antoine De Saint Exupery is the biggest containership under the French flag and one of the largest ever built. The ship has a length of 400 meters, beam of 59 meters, and depth of 33 meters. One of the distinct things about the new ship is that it is bears the group’s new livery, which, the company says, reflects its dynamism.

To improve the boxship’s environmental performance and efficiency, the CMA CGM Antoine De Saint Exupery is fitted with a Becker Twisted Fin. The Becker Twisted Rudder improves the propeller’s performance, helping to reduce energy consumption and CO2 emissions by 4%.

The ship is named for Antoine de Saint-Exupéry, a pioneering aviator of the Aéropostale, writer, journalist and poet. He won several of France’s highest literary awards and the U.S. National Book Award. He joined the French Air Force at the outbreak of World War II, and later, the Free French Air Force.

On February 6, CMA CGM Antoine De Saint Exupery will enter into service on the FAL 1 service (French Asia Line 1), which connects Asia to Northern Europe. This line offers a weekly service to 16 ports of call for a duration of 84 days.

The company has invested $2.3 billion in the Philippines. Since it delivered its first ship in 2009, HHIC-Phil Inc. has exported a total of 113 ocean-going merchant ships worth more than $6 billion, making the Philippines one of the top five shipbuilding countries in the world.

HHIC-Phil Inc. is currently building a number of commercial ships of high grade specifications such as liquefied petroleum gas carriers and oil crude tankers besides ULCS. These newbuilding projects are expected to be completed and delivered the end of 2019.