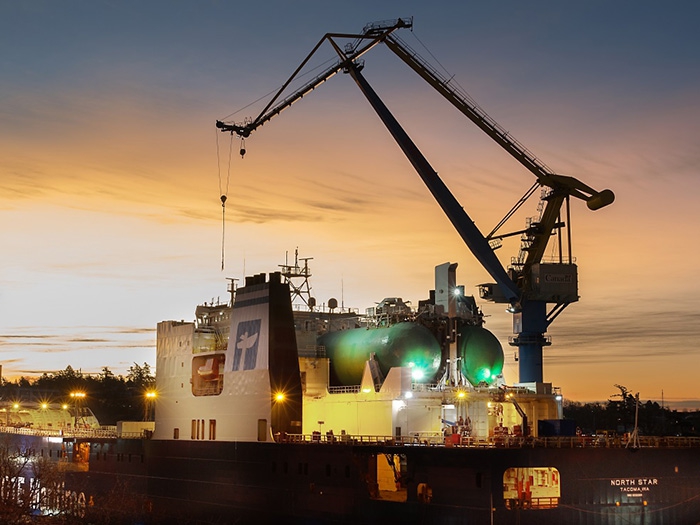 MARCH 13, 2018 — Canada’s Seaspan Shipyards says that its capabilities with LNG engine conversions have been demonstrated by a major project milestone achieved by its Victoria Shipyards (VSL).

The shipyard was selected by TOTE Maritime Alaska to carry out the yard production work and docking necessary for the conversion of its two TOTE Orca class vessels to dual-fuel systems, a process that is being carried out in four phases and will enable the two ships to use LNG as fuel.

The North Star, the first of the two 839-foot-long RO/RO ships arrived at VSL in December, 2017 kicking off the process of converting the diesel engines to dual-fuel systems and ] recently completed its 60 day shipyard visit.

As we reported earlier, the visit saw her outfitted with two LNG tanks immediately behind the bridge. In addition to the LNG tanks and accompanying infrastructure, the ship received critical engine updates necessary to utilize LNG as a fuel and underwent a standard regulatory dry-docking.

Each of the Orca Class vessels is powered by four MAN 58/64 engines that will be retrofitted to MAN 58/64 retrofit units under a contract with MAN PrimeServ – MAN Diesel & Turbo’s after-sales division.

“Seaspan Shipyards is proud to have conducted this work for TOTE Maritime Alaska as part of its efforts to convert its fleet to LNG-fueled vessels,” said Brian Carter, President & CEO of Seaspan Shipyards. “With the completion of this first phase of work, our workforce has demonstrated that it is fully capable of handling these complex conversions and we look forward to future work on similar projects.”

“Phase one of the first major LNG conversion in North America on a full-sized vessel has now been successfully completed,” said Joe O’Rourke, Vice President & General Manager of VSL. “We plan to continue to build our reputation as an industry expert for all LNG related work on the West Coast. And we express our thanks to TOTE and their entire team in placing their trust with VSL on this first in kind project.”

“Victoria Shipyards have demonstrated that they have the technical expertise and skilled work force to guide TOTE Maritime Alaska’s Orca class vessels through the conversion process,” said Phil Morrell, TOTE Vice President Marine Operations. “They are the right partner for TOTE in this important environmental effort.”