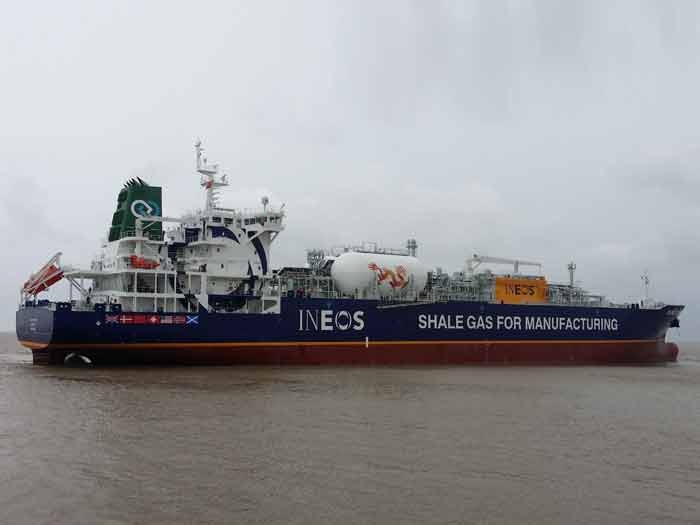 The Dragon vessels were originally designed as dual-fuel LNG/diesel powered vessels, with two 1,000 cu m LNG tanks on deck powering two Wärtsilä 6L20 DF main engines with a total output of 2,112 kW and two shaft generators with a total  output of 3,600 kW power. As we reported in May (see earlier story), as the vessels will initially transport ethane from the U.S, to the U.K. Ineos refineries, the ability to also burn ethane was added to allow use of the cargo gas as fuel.

"The ability to burn ethane as well as LNG to power these unique vessels is a major step forward in the use of clean fuels. It means the vessels can use cargo gas during transits to provide a clean and clear commercial and environmental advantage," says Bureau Veritas Business Development Manager Martial Claudepierre. "We have worked with Evergas and the Danish Maritime Authority to verify and ensure that the use of ethane is at least as safe as required by the IGC and will not impair the engine compliance with MARPOL Annex VI."

According to Mr. Claudepierre, using ethane required extra engine room ventilation and additional gas detection, plus modifications to the main engines including a lower compression ratio, different turbocharger nozzles and de-rating of the engine to cope with the lower knocking resistance of ethane. "But," he says, "the gains in not carrying an additional fuel and in environmental performance from being able to burn clean fuel throughout the voyage are significant."

SEPTEMBER 15, 2015 — Bureau Veritas is classing the first ethane powered ship. JS Ineos Insight is the first of eight 27,500 cu.m multi-gas Dragon-class vessels being built by Chinese shipbuilder Sinopacific for Denmark’s Evergas. Named on July 14, the vessel can carry ethane, LPG or LNG and has options for ethane, LNG and conventional diesel power.