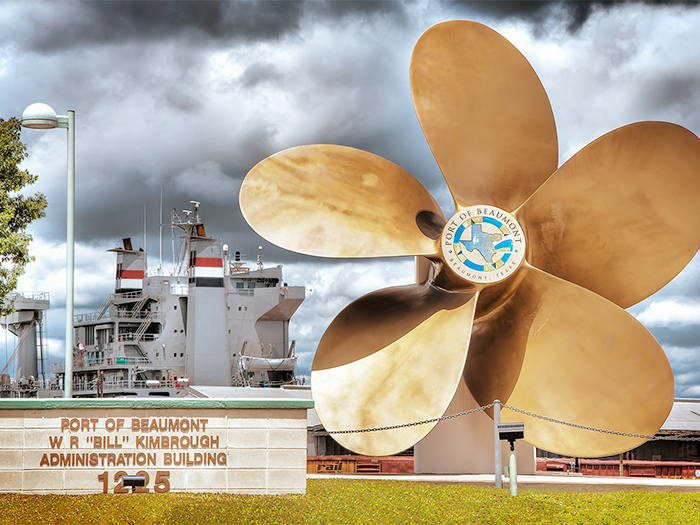 The Port of Beaumont, Texas, has recorded what Port Director Chris Fisher calls a “banner year.” For the first time in the port’s 103-year history, more than 6.5 million tons of cargo passed through its eight terminals and operating revenues exceeded $24 million, shattering previously held tonnage and revenue records.

Starting in Fall 2019, the port will be ramping up infrastructure, resiliency and security improvement projects that will help sustain the level of growth experienced over the last several years. The port closed out FY 2018-2019 with operating revenues exceeding $24 million, a 42% increase over the previous year. Tonnage, or cargo volume, increased more than 71 percent, and almost every cargo segment has seen double digit growth year-over-year.

“This banner year is attributed to several things; a strong Port team including commissioners and staff, a forward-thinking approach to infrastructure development, a favorable market, and a commitment to being good stewards of public funds,” says Fisher. “The Port of Beaumont has identified more than $458 million in projects that we are working toward completing as part of our Capital Improvement Program. Our top priorities have always been fiscal responsibility, job creation, and economic growth and we are proud see our efforts paying off.”

The Port Security Grant will fund four projects that include construction of a new security control center, deployment of a new interoperable communication system, purchase of an emergency generator and purchase of software to maintain the Port’s security systems. The FEMA Harvey grant will fund a portion of the port’s Shoreline Repair project, an area that was damaged during Tropical Storm Harvey. The $5 million Economic Development Administration grant will go toward the first phase of a $79 million dock project that will increase cargo handling capacity by 25% and support approximately 3,000 additional direct, induced, indirect and related user jobs.