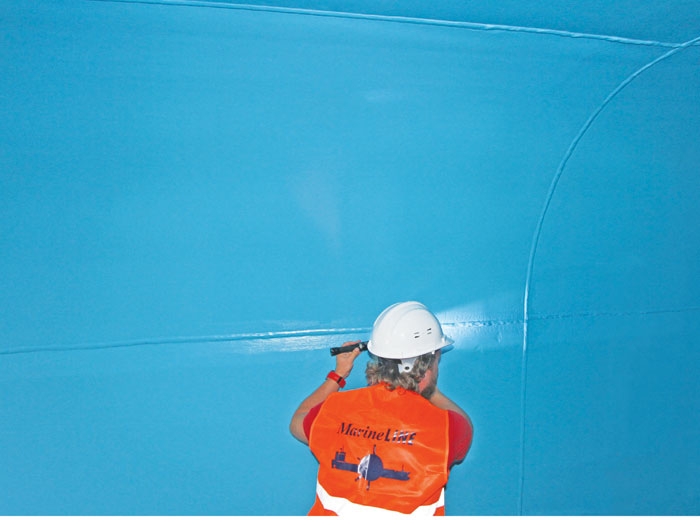 SEPTEMBER 16, 2016 — Advanced Polymer Coatings (APC), Avon, Ohio, has developed a new “eco friendly” formulation of its MarineLine 784 cargo tank coating system with added performance benefits. More than 600 ships have used MarineLine tank coatings and the number is expected to climb as new coatings advancements are introduced and current coatings contracts are wrapped up at the trade fair.

In the new eco-friendly MarineLine 784 formulation, APC has reduced the VOC level to 30 grams per liter, said to be the lowest level of any cargo tank coating.

The new formulation can be sprayed using plural component equipment to separately hold the coating components (resin and catalyst) until spraying occurs. This reduces waste and eliminates the need for added solvent.

Airless spraying, can be used after adding in a recommended amount of non-VOC solvent to the coating prior to application.

As these developments show, APC is trying to lead the maritime industry into using more advanced spray technologies that other industrial markets are already successfully using.

A key performance feature of new MarineLine 784 is its ability to resist Methanol up to 50°C.

This meets a growing need by shipowners and operators, especially when carrying Methanol in the Middle East region, where temperatures can escalate.

This capability is made possible because APC has engineered even tighter crosslinking in MarineLine 784’s ladder-like structure, with very small openings between the “rungs.” This is is in contrast to the larger openings of phenol epoxy coatings.

APC says that when cured, MarineLine 784 is virtually impenetrable by preventing even very small chemical molecules from entering into the polymer structure.

APC also offers a breakthrough “low temperature cure” cargo tank coating: GuardLine. This is a lower price solution as the coating does not require heat curing. APC thus provides shipowners and operators with a choice of MarineLine 784 — for higher level chemical service, or GuardLine — for its excellent ability to carry less severe cargoes such as CPPs, Bio-Fuels, Vegetable and Edible Oils, and DPPs.

APC says that GuardLine’s unique advantages are greater versatility and chemical resistance than phenolic epoxy or zinc coating, but at a cost that is comparable to these coatings.

GuardLine, which has a distinctive blue color, requires only an ambient cure at +25°C (+77°F) to achieve high service capability. It has an eco-friendly ultra low VOC formulation, and can be applied by plural component or airless spray equipment.