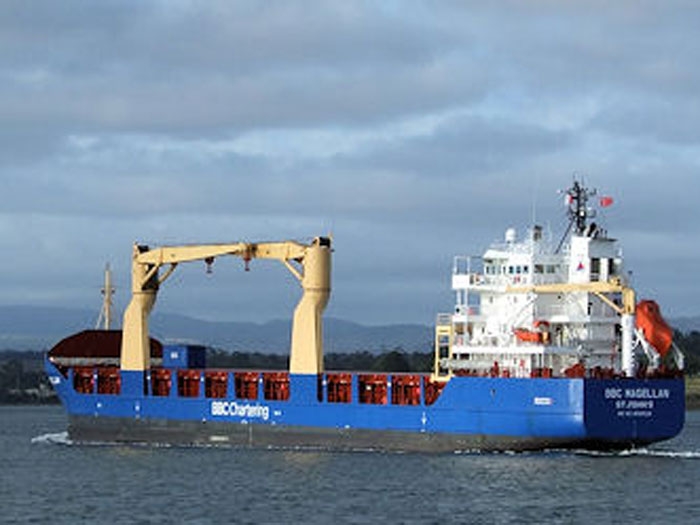 BBC Magellan has been banned from U.S. for five years

MARCH 16,2016 — The 6,300 dwt Antigua & Barbuda flagged multipurpose tweendecker M/V BBC Magellan won’t be seen in the U.S. for the next five years.

Yesterday the two German companies that own and operate the ship — Briese Schiffahrts GmbH & Co. KG and Briese Schiffahrts GmbH & Co. KG MS “Extum” — pleaded guilty to failure to maintain an accurate oil record book, in violation of the Act to Prevent Pollution from Ships and tampering with witnesses by persuading them to provide false statements to the U.S. Coast Guard about a bypass hose on the vessel that was being used to discharge oil into the sea.

The two companies were sentenced to pay a total of $1.25 million in fines and a $250,000 community service payment to the National Fish and Wildlife Foundation to fund projects that enhance coastal habitats of the Gulf of Mexico and bolster priority fish and wildlife populations.

In addition, the BBC Magellan was banned from doing business in the United States for the next five years.

In March 2015, during an inspection at the Port of Pensacola, the U.S. Coast Guard discovered an improperly attached rubber hose. Officials later determined that, between January and March 2015, the crew of the M/V BBC Magellan, acting on behalf of the vessel’s owner, had installed and illegally used the rubber hose to remove oily wastes from the vessel’s holding tanks and discharged them directly into the ocean. The crew also failed to make the required entries in the vessel’s oil record book. When questioned about the hose’s purpose and how oily wastes were discharged from the ship, the chief engineer instructed other crew members to lie to the Coast Guard.

The pleas and sentences were announced by Assistant Attorney General John C. Cruden for the Justice Department’s Environmental and Natural Resources Division and Acting U.S. Attorney Christopher P. Canova for the Northern District of Florida.