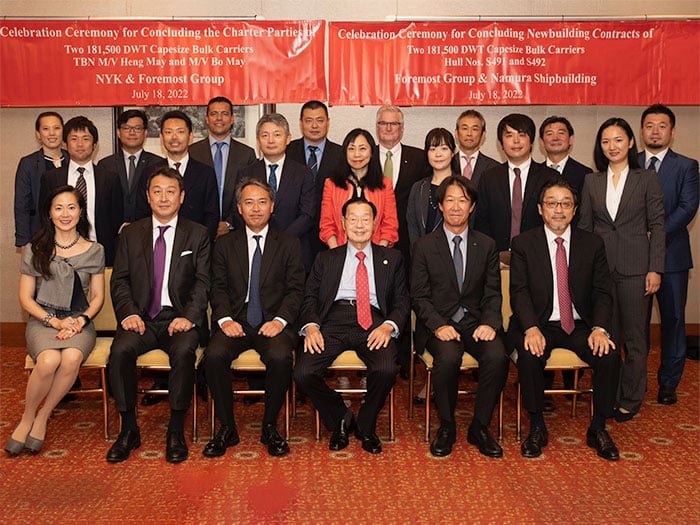 New York City headquartered Foremost Group yesterday signed an order with Namura Shipbuilding for two new 185,000 dwt capesize dry bulk carriers that will be among the most eco-friendly in the world. Foremost also signed a charter party agreement with NYK for each ship to be time chartered to NYK for seven years

The newbuilding order and the charter agreements were signed in a ceremony at the Harvard Club in New York that was attended by the Foremost Group’s founder, maritime industry icon Dr. James Chao. Others in attendance included top officials from both Foremost and Namura, the Japanese Consul General to the U.S., Ambassador Mikio Mori, and senior management from NYK (the charterers), and the president and CEO of Sumitomo Corp. of Americas Group, Tomonori Wada.

“We are pleased to sign this agreement with Namura Shipyards, which will build on our track-record of having a fleet of state-of-the-art dry bulk carriers built to our specifications,” said Foremost Group Chair and CEO Angela Chao. “We welcome this partnership and look forward to working with Namura for many years to come.”

“Today indeed marks a wonderful day in the U.S.-Japan relationship – between our two countries, among our three companies, and the multilateral cooperation we have to deliver the world’s goods in the most environmentally friendly way possible – and that is shipping,” she continued. “Today also marks our first newbuilding orders with Namura Shipbuilding. As you all know, Namura shipyard has an impeccable reputation and builds some of the finest capesize bulk carriers in the world. With a strong family tradition, now being led by its fourth generation under the strong leadership of Kensuke Namura san, Namura continues to innovate and develop, building the world’s most eco-friendly, lowest carbon footprint, lowest NOx emitter, ME engine capesize bulk carrier in the world. We are proud to add these beautiful new ships to our fleet, ensuring that Foremost remains on the forefront of environmental friendliness. Thanks to Sumitomo, led by President Wada here in the U.S., for acting as a bridge between Namura and Foremost, and for facilitating trade and cooperation between our two companies, as well as between our two countries.

“Today marks a deepening and strengthening of a decades long relationship with NYK, one of the leading and largest shipping companies of the world. We have a number of ships chartered to NYK, now and in the past, but this new project marks a joint commitment to their new “Green Policy”, and these two ships will be built to environmental standards on NOx emissions and carbon emissions, 2 or more years in advance of what is regulatory required. This is a strong demonstration of our value alignment and mutual commitment to our environment and the generations that will come after us. Hamazaki san and your team, we look forward to working together with you for many years to come.

“We are also delighted and proud to have the opportunity to receive a first shipbuilding contract from the Foremost Group and with these vessels having long time charter agreement with NYK, we are confident that this new partnership will definitely lead the project to a successful conclusion,” said Mr. Kensuke Namura, President of Namura Shipbuilding.

“We are very pleased to conclude a long-term charter contract for the new Capesize bulk carriers built by Namura Shipbuilding with the leading shipowner Foremost,” said Mr. Koichi Hamazaki, General Manager of Tramper Group of NYK. “We believe that these two vessels will symbolize the long-term good relationship between Foremost and NYK.”

The ships will be delivered in 2024. The freight will be major dry bulk commodities like iron ore and bauxite. As their long term time charterer, NYK will determine what each ship carries and where and also plans to also engage the ships on the spot freight market.

These will be some of the first ships that are in compliance with IMO’s EEDI phase three requirements. The engines will be the latest state of the art electronically controlled MAN B&W engines, built by Mitsui E&S and complying with the latest Tier III NOx emission reduction standards.

There are many other energy saving devices and design elements incorporated into hull optimization and the design of the ship. Namura has trademarked some of the technologies such as the Namura Flow Control Fin, Flat-FIN, Rudder Fin, as well as adding a Pre-swirl Stator Fin to greatly improve the Vessel’s propelling efficiency by more than 10%. The vessels are upgraded to the latest energy-saving paint and the design has been upgraded to safely consume bio-fuels. Burning biofuel can further reduce CO2 emissions by as much as 20% compared to conventional heavy marine fuel oil on the life-cycle, well-to-wake basis.

“In terms of IMO’s technical energy efficiency measure EEDI (Energy Efficiency Design Index), the vessels are ahead of compliance with EEDI phase III requirement, which would only apply to newbuildings ordered from year 2025 and onwards. Thus these Vessels are 3 years ahead of the EEDI requirement. In terms of IMO’s operational energy efficiency measure CII (Carbon Intensity Index), these vessels’ CII rating is expected to stay at the highest level for many years after delivery, although this will also depend on how the charterer, NYK, trades the vessel. “But given NYK’s commitment to carbon neutrality and eco-friendly ships, we believe NYK will work with us to keep the vessels at that the highest CII rating possible,” says Foremost.

Foremost enjoys a decades long relationship with NYK, one of the leading shipping companies in the world. It has a number of vessels on time charter to NYK, which seeks reliable owners who deliver superior performance for the medium and long-term, not just the short-term. Foremost says these latest newbuildings signify a deepening and strengthening of the mutual cooperation between the two companies, adding that “a seven year contract is longer than the average, again demonstrating the trust and confidence NYK has in Foremost, its management and its ships.”