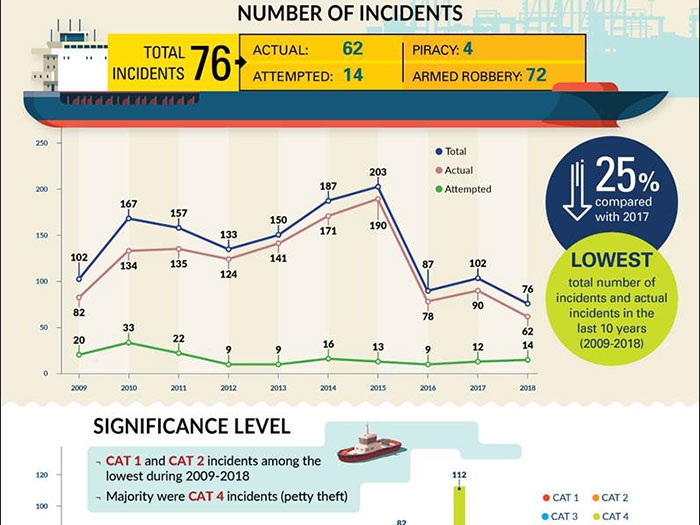 JANUARY 15, 2019 — Piracy and armed robbery incidents against ships in Asia have fallen to their lowest levels since 2007, according to the Regional Cooperation Agreement on Combating Piracy and Armed Robbery against Ships in Asia (ReCAAP).

The just released January-December 2018 annual report from the ReCAAP Information Sharing Center (ISC) says there was a total of 76 incidents of piracy and armed robbery reported in Asia in 2018, comprising 62 actual incidents and 14 attempted incidents

Of the 76 incidents, four were incidents of piracy, while 72 were armed robbery against ships

Areas of Improvement noted in the report:

There was improvement at some ports and anchorages in 2018, particularly at the Manila anchorage in the Philippines

There was no theft of oil cargo in 2018; while there were two incidents of suspicious intent to steal oil cargo reported in June and August 2018, the Malaysia Maritime Enforcement Agency (MMEA) successfully arrested the mastermind and perpetrators in both incidents

There were more than ten incidents at ports and anchorages in Chittagong, Bangladesh, and in Samarinda, Indonesia

There were also slight increases reported in Malaysia and Vietnam

Despite the decrease in the number of incidents in the Sulu-Celebes Seas and waters off Eastern Sabah, the abduction of crew for ransom remains a serious threat in the area.