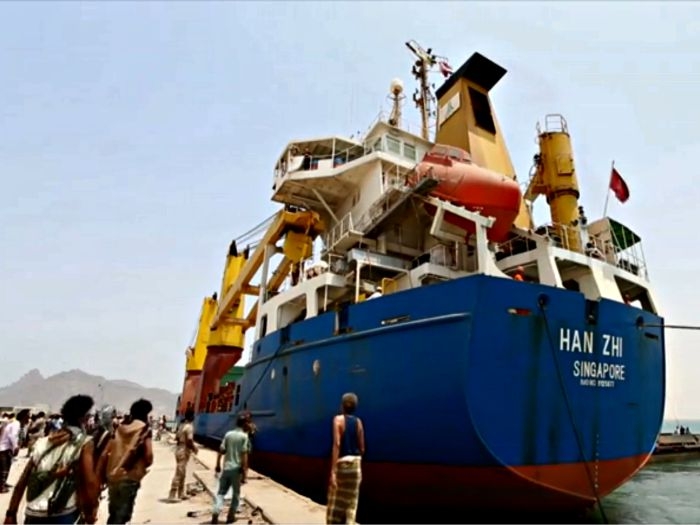 The Han Zhi docked in Al-Bariqa oil port in Aden

AUGUST 10, 2015—The first UN aid ship to arrive in war-torn Yemen in more than four months docked in the oil port of Al-Bariqa in the city of Aden on July 22 loaded with 7,000 tonnes of vital food and medicine.

The Singapore-flag general cargo ship Han Zhi was under the armed protection of ESC Global Security while it unloaded the supplies. It was estimated that there was enough food onboard to feed 180,000 people for a month, according to the UN’s World Food Program.

ESC Global Security (ESCGS), one of the world’s leading independent security consultants, was chosen by shipping agents to protect 7,713 dwt Han Zhi, which was chartered by the UNHRO to deliver vital supplies to Yemen.

The Han Zhi docked at the oil port of Al-Bariqa in the Aden with ESCGS personnel onboard ensuring the safety of the crew and cargo during the offloading and the UN food agency described the arrival as a “major breakthrough” since the internal war in Yemen began in March. The UN’s World Food Program (WFP), which chartered the ship, had tried repeatedly in past weeks to deliver aid to the war-torn city but failed because of security concerns. The ship had to sit at anchor off of the coast since June 26 awaiting safe passage before delivering the aid.

Early in July a humanitarian ceasefire was declared by the UN but failed to hold and the World Food Program recently described the truce as the “final hope” to deliver desperately needed aid. With the region just “one step away from famine” according to the UN, ESC Global Security was appointed to protect the ship on the hazardous journey into Aden.

Jaanus Rahumägi, CEO of ESC Global Security, believes the deployment of armed security was vital to ensure the safe delivery of these vital food supplies and medicine.

“The internal conflict in Yemen and the dangerous conditions for shipping arriving in Aden was the driving factor in ESC Global Security being contracted to protect the ship,” says Rahumägi. “We understood the risks, defined the parameters for our armed security operations and put into practice highly trained and experienced personnel to accompany the ship into Aden.”

Adds Rahumägi:“Each operation is significantly different from others but we understand the needs of the maritime industry in protecting not only vessels and crew, but also the cargoes and dockside operations surrounding such ventures. Our prime concerns are safety and operational integrity. In this case it required confidence and experience which we provided for the ultimate benefit of thousands of desperate people in Yemen.”