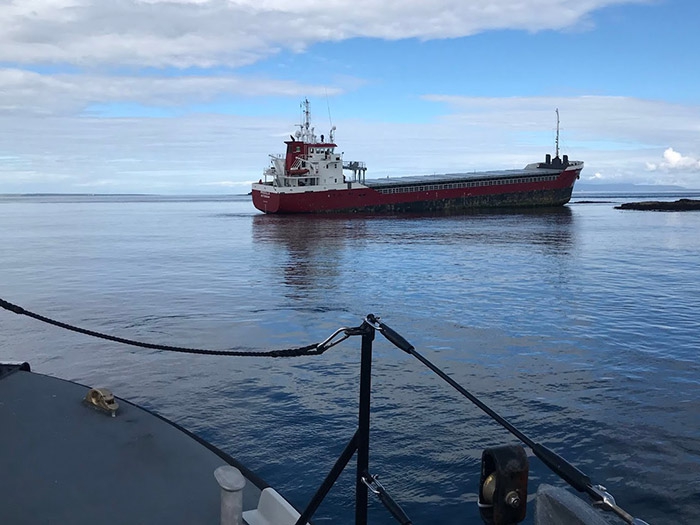 JULY 18, 2018 — The U.K. Maritime and Coastguard agency reports that just after 3.30 am, HM Coastguard received a report that a vessel had run aground on the Pentland Skerries approximately 5 nm north east of Duncansby Head.

The vessel, the 89m, 2009-built Netherlands flag cargo ship Priscilla, has six people onboard and reported no significant damage and there is no sign of any pollution on scene.

Kaimes Beasley, Duty Controller for HM Coastguard said: “At this stage the vessel is stable and the crew on board are safe and well and there is no risk to life. This incident is ongoing and we will provide further updates as the situation develops.”

By 12.20 pm there were two tugs and the Thurso RNLI Lifeboat on scene and hopes were that the vessel could be refloated early to mid-afternoon just before high water. A local tug was on scene early this morning and a more powerful tug, arranged by the owner of the vessel (Royal Wagenborg), had arrived from Scapa Flow.

At 3.00pm it was expected that, within the hour (at high water 4.00 pm local time,) an attempt would be made to tow the vessel from its current position and the Emergency Towing Vessel Ievoli Black was proceeding to the scene as a precautionary measure. Longhope RNLI Lifeboat was also on scene having taken over from Thurso RNLI Lifeboat.

At 6.00 pm, HM Coastguard reported that after several attempts, the tugs on scene had been unable to refloat the Priscilla during the high water period.

The Ievoli Black arrived on scene at around 5 pm and is currently on standby, while a refloat plan is formulated. The ETV will be standing by the vessel overnight and it is unlikely that a further attempt will be made to refloat the vessel before the next high water period which is due at 4 am tomorrow.