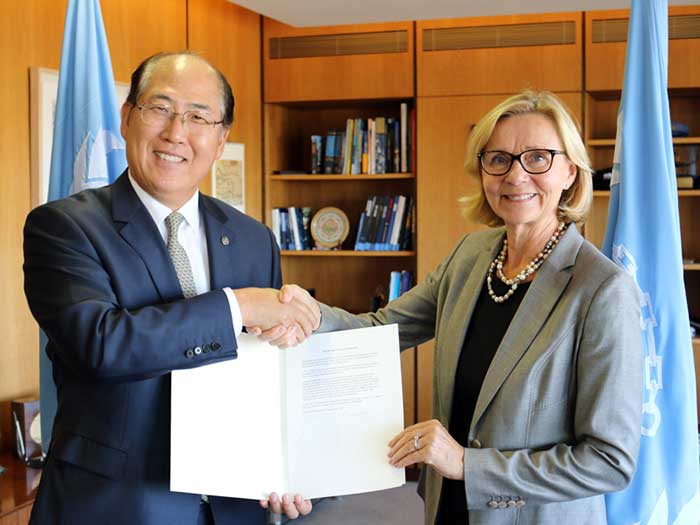 Finland handed its instrument of acceptance to IMO Secretary-General Kitack Lim today, bringingthe combined tonnage of contracting states to the treaty to 35.1441%, with 52 contracting parties. The BWM Convention will enter into force 12 months after ratification by a minimum of 30 states, representing 35% of world merchant shipping tonnage. Accordingly it will enter into force September 8, 2017.

Under the Convention’s terms, ships will be required to manage their ballast water to remove, render harmless, or avoid the uptake or discharge of aquatic organisms and pathogens within ballast water and sediments

“This is a truly significant milestone for the health of our planet,” said IMO Secretary-General Kitack Lim.”The entry into force of the Ballast Water Management Convention will not only minimize the risk of invasions by alien species via ballast water, it will also provide a global level playing field for international shipping, providing clear and robust standards for the management of ballast water on ships.”

In the real world, of course, things may be a little trickier than suggested by all the happy smiles at IMO HQ.

The International Chamber of Shipping (ICS) today warned “it is now more vital than ever that IMO Member States finalize the revision of the G8 Type Approval Guidelines for treatment systems at the next session of the IMO Marine Environment Protection Committee this October.

“We must ensure that shipowners can have absolute confidence that the expensive equipment they will soon have to install will be effective in treating ballast water conditions normally encountered during worldwide operations and be regarded as fully compliant during Port State Control inspections.

“The fixing of a definite implementation date, after so many years of delay, will at least give shipowners some of the certainty needed to make important decisions about whether to refit the new mandatory treatment equipment or otherwise to start sending ships for early recycling” Mr. Poulsson added. “Unfortunately, the entry into force of the new IMO regime will not resolve the extreme difficulties that still exist in the United States.”

ICS says there is still great uncertainty with respect to the more stringent United States approval regime for treatment equipment, which started to be enforced in January 2014 (the U.S. not being a Party to the IMO Convention).

The U.S. regulations require all ships that discharge ballast water in U.S. waters to use a treatment system approved by the U.S. Coast Guard. However, because no systems have yet been approved, ships already required to comply with the U.S. regulations have either been granted extensions to the dates for fitting the required treatment systems or else permitted to install a USCG accepted Alternate Management System (AMS).

However, an AMS will only be accepted for operation for five years, after which time a fully USCG approved system must be installed. But the USCG does not guarantee that an AMS will be subsequently granted full approval. Hence shipowners that may have installed an AMS in good faith, at a cost of between US $1-5 million per ship, might then have to replace the system completely after only 5 years.

“The impasse in the U.S. is a particular concern for operators that have installed ultra-violet systems” said Mr. Poulsson.

ICS says that the situation has been compounded by the Coast Guard announcing, at the end of last year, that it will not accept the methodology used by other IMO Member States to approve UV treatment systems when assessing the number of viable organisms in treated ballast water.

ICS says it “will therefore be working with IMO Member States to impress upon the United States the importance of coming to a pragmatic solution. Otherwise, once the IMO Convention finally enters into force next year, the shipping industry will be faced with real chaos.”

Some manufacturers of UV based systems aren’t expecting a “pragmatic solution” from the USCG any time soon. They are going through the expensive process of having their systems retested in accordance with the USCG approved methodology.