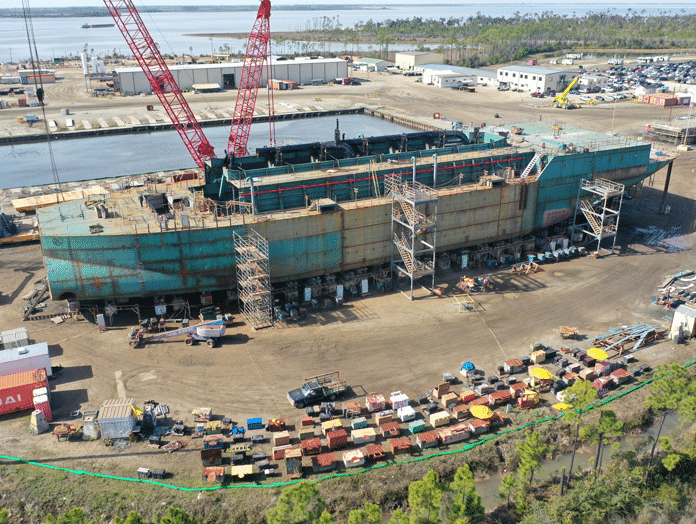 Eastern Shipbuilding Group is busy with the construction of the trailing suction hopper dredge R.B. Weeks (ESG Hull 258). The dredge is a sister ship to the Magdalen (ESG 256), delivered to Weeks Marine Inc. in 2017

The 356- by 79-foot, 6-inch by 27-foot, 3-inch dredge R.B. Weeks is named in honor of Richard B. Weeks, a co-founder of Weeks Marine and married to Magdalen Weeks, the namesake of the other dredge. This new dredge is being constructed at Eastern’s Allanton shipyard and was designed by Royal IHC, which also delivered a number of its key components.

The R.B. Weeks has the following characteristics:

“As we eagerly await completion of the R.B. Weeks early next year, the Magdalen, delivered in December 2017, continues to exceed all of our expectations in terms of performance, reliability, and endurance,” said Steve Chatry, senior vice president, Weeks Marine Inc. “This is a testament in large part to the quality and workmanship that we have come to expect from the Eastern Shipbuilding Group.

“The relationship between Weeks and Eastern has everything to do with the success of the builds and we look forward to continuing our partnership for years to come.”

“In nearly all respects, the R.B. Weeks is identical to the Magdalen,” said Joey D’Isernia, president of Eastern Shipbuilding Group. “The R.B. Weeks is a technical sister ship to the Magdalen, so the vast majority of the ship’s designs were transferable to the Magdalen with relatively minor updates. This has been great for us and for Weeks Marine. We were able to drastically cut down the engineering timeframe at the front of the project, get a quick start on construction, and continue construction with good information to build the vessel quickly and efficiently. Domestic operators get as much life out of their dredgers as they can, so we can expect to see the R.B. Weeks work alongside the Magdalen for many decades to come.

“The integrated electrical power, propulsion, and dredge machinery package remained nearly identical to the Magdalen‘s. Updated EPA emissions regulations required upgrading the engines form Tier II to Tier IV. It was very convenient that the Magdalen had GE engines because this manufacturer opted for EGR to meet Tier IV requirements rather than urea after treatment. That meant we did not have to find a home for an SCR or urea tanks, or build a separate urea system. Crew comfort is important, so WMI spec’d in an HVAC system that gives crewmembers more control of the air temperature in their cabins-we hope that this serves them well. The number of bunks was increased also from 20 to 26. The lifeboat, life raft, and MSD capacities were increased as a result. There have been some other small changes, but that wraps up the most significant ones.”

“Just as the forces of entropy silt in our waterways and erode our beaches, we rely on dredgers (the people and the ships) to form a bulwark against decay. So must we all. It is our responsibility to protect our country, our infrastructure, and our institutions. Our mission every day is to keep our promises and deliver results. We are proud to be building the Offshore Patrol Cutters for the U.S. Coast Guard where they will serve critical national security missions around the globe as well as these critical Jones Act dredging assets that will sustain our environment and protect our waterways for decades to come.”

“Eastern’s most valued asset is our employees. Our BUILD initiative is an all-encompassing program to promote workforce development, recruitment, and retention to foster a long-term sustainable environment for the personal and professional growth of our employees. I’m proud to say that ESG has successfully doubled its direct and subcontract workforce since Hurricane Michael, while at the same time increasing the percentage share of our workforce that is direct hire. We have also developed a pipeline of talent through partnerships with more than a dozen CTE programs in the area and will continue to invest in the shipbuilders of tomorrow.”