“Both of our segments continued to improve during the quarter, delivering higher revenue and operating income sequentially and year-on-year,” said President and CEO David Grzebinski. “In the inland marine transportation market, pricing on spot and term contracts continued to move higher, with both renewing higher in the mid-teens. We anticipate continued gradual upward movement in pricing in the second half of 2022 with late fourth quarter term contract renewals setting up for a strong 2023. Distribution and services also performed well as we continued to navigate persistent supply chain constraints. We continue to expect steady progression in quarterly earnings as we move through the remainder of 2022.”

“In our coastal marine business, overall market conditions steadily improved during the second quarter, where we did see the few spot contracts that repriced in the quarter renew higher in the low double digits,” said Grzebinski. “Utilization rates remained in the low 90% range with modest improvements late in the quarter. These trends, combined with previously announced cost savings actions, and higher coal shipments contributed to coastal marine achieving positive operating margins.”

“In distribution and services, activity remained strong throughout much of the segment with sequential and year-on-year revenue and operating income growth. In oil and gas, we experienced increased demand for new transmissions and received incremental orders for new environmentally friendly pressure pumping equipment and frac-related power generation equipment. However, supply chain constraints continued in the quarter, delaying deliveries of new manufactured equipment. In commercial and industrial, demand was solid, with increased year-on-year activity across our businesses,” Grzebinski concluded.

Term contracts that renewed in the second quarter also increased in the mid-teens range on average compared to a year ago. Revenues in the inland market increased 25% compared to the 2021 second quarter primarily due to increased volumes, barge utilization, pricing, and fuel rebills. Rapidly rising fuel costs during the quarter were a headwind to margins, resulting in operating margins just below double digits. As term contracts renew in the second half of the year and into 2023, we expect to recover these costs, as well as other inflationary costs. The inland market represented 78% of segment revenues in the second quarter of 2022.

In coastal, market conditions improved modestly during the quarter, with Kirby’s barge utilization remaining in the low 90% range. Pricing in the spot market and term contract renewals also increased in the low double digits sequentially and year-on-year. Revenues in the coastal market were 12% higher compared to the 2021 second quarter and represented 22% of segment revenues. The coastal business had a positive operating margin in the low-single digits during the quarter.

In his comments on the 2022 full year outlook, Grzebinski said that in inland marine favorable conditions are expected to continue going forward, “driven by high refinery and petrochemical plant utilization, increased volumes from new petrochemical plants, and minimal new barge construction across the industry. With Kirby’s barge utilization expected to be in the low to mid-90% range and limited new supply in the market, the company expects further improvements in the spot market, which currently represents approximately 40% of inland revenues.”

In coastal marine, Kirby expects modestly improved customer demand through the balance of the year with company barge utilization in the low to mid-90% range. Rates are expected to continue slowly improving, but meaningful gains remain challenged by underutilized barge capacity across the industry. For the full year, with the impact of the company’s exit from the Hawaii market, coastal revenues are expected flat to up in the low single digits compared to 2021. Revenues and operating margins are expected to be impacted by ongoing planned shipyard maintenance and ballast water treatment installations on certain vessels, with offsets from higher coal shipments. Coastal operating margins for the remainder of the year are expected to remain in the low single digits.”

The balance of approximately $20 to $30 million largely relates to new machinery and equipment and facility improvements in distribution and services, as well as information technology projects in corporate. Overall, Kirby expects to generate net cash provided by operating activities of $390 million to $450 million, with free cash flow of $200 million to $280 million in 2022. 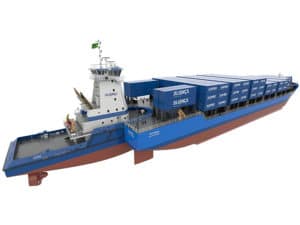