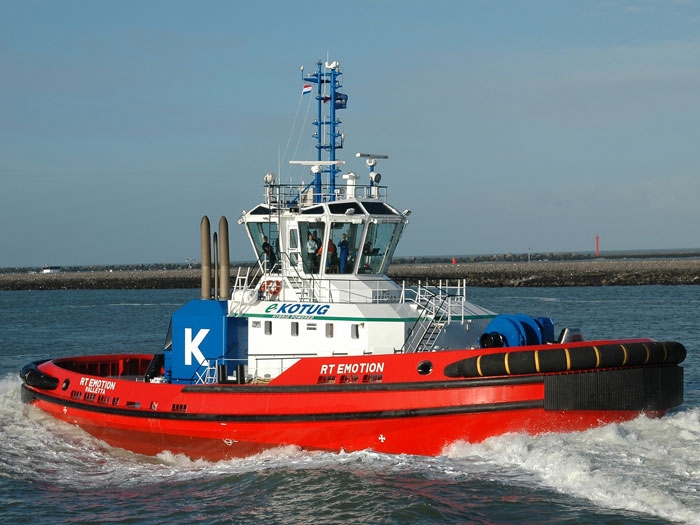 The Lady Sponsor was Ms. Annika Bootsman-Kleberg, Member of the Wallenius Board and granddaughter of Olof Wallenius, the founder of long time Kotug customer Wallenius Lines. She named the vessel RT Emotion.

RT Emotion is Kotug’s third 32 m hybrid rotor tug and will operate in Bremen. The two others, RT Adriaan and RT Evolution, are operating in the Port of Rotterdam.

The next-generation ART80-32 Rotortugs are built by Damen Shipyards and designed by an alliance of Rotortug B.V. in the Netherlands and Robert Allan Ltd in Canada.

“Damen and Kotug have worked together closely in the development of the ART80-32 Rotortugs. We are proud of this collaboration which has resulted in significantly reduced emissions and fuel consumption as well as outstanding performance,” says the shipbuilder’s Chief Commercial Officer Arnout Damen.

Seen as a true advancement of hybrid technology and performance, the propulsion configuration draws on the proven design of Kotug’s RT Adriaan – the world’s first hybrid rotor tug built under class. The Rotortug’s hybrid capacity is generated by three electric motors, complemented by a battery pack and managed by an intelligent XeroPoint Hybrid Propulsion System.