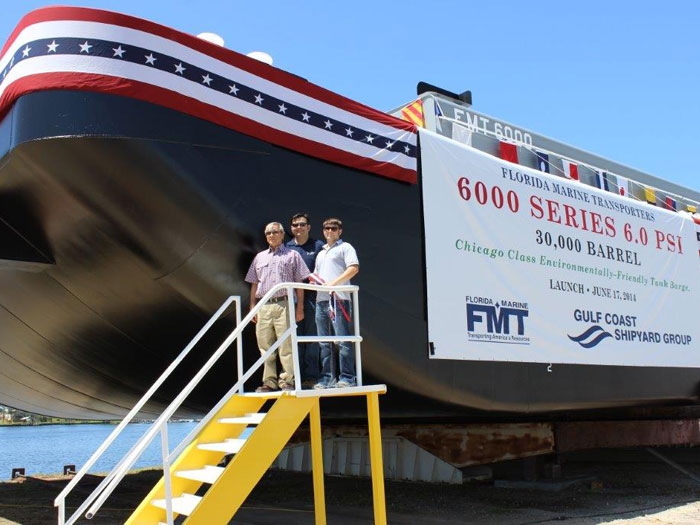 JUNE 19, 2014 — The first in a new series of tank barges for Florida Marine Transporters, Mandeville, LA, was christened this week in a ceremony at Gulf Coast Shipyard Group, Inc.’s Gulfport, MS, shipyard.
J
The barge FMT 6000, is the first of FMT’s new 6000 series 6.4 PSI,30,000 barrel, environmentally-friendly tank barges. The new series continues FMT’s tradition of having the latest design and most environmentally-friendly equipment operating on America’s waterways.

Utilizing proprietary engineering developed for FMT by the engineering group of Guarino & Cox, this series of new barges minimizes vapors escaping into the atmosphere while increasing safety factors when the barge is in operation.

To further reduce emissions, all diesel engines mounted on these barges are Tier III/EPA compliant.

As with all barges Gulf Coast Shipyard Group has previously built for FMT prior to this delivery, this barge is ice-strengthened in order to minimize damage in harsh winter conditions. Remarkably, FMT’s barges suffered no damage when operating in severe ice conditions this past winter, one of the coldest in recent history.

The coating system for all FMT barges has been selected for reduce the release of harmful VOCs (volatile organic components) and is of a higher standard than generally found in the inland industry. FMT also requires painting of voids and other areas that would not normally be painted in order to insure the quality and longevity of its young fleet.

FMT insisted that the construction of these barges take place entirely on concrete and under cover to insure that no paint or other contaminates ends up in the soil or streams.

Additional spill containments and redundant gauging systems are also incorporated to protect against accidental overflow of product—all in an attempt to protect the environment and the safety of the crew.

While many of the measures FMT incorporated in the design, construction and operation of this new barge series exceed current federal regulations; they are in keeping with CEO Dennis Pasentine’s vision when he founded FMT 20 years ago of operating in the relentless pursuit of a safe, efficient and environmentally-sound operation.

Gulf Coast Shipyard Group began building state-of-the-art 297 ft. x 54 ft. 30,000 barrel barges for FMT in late 2011 at its Gulfport, Mississippi facility. The contract currently calls for a total of 32 barges; however with options for 18 additional units, the contract could grow to 50 barges. The shipbuilder is now delivering FMT barges on a 25-28 day schedule.