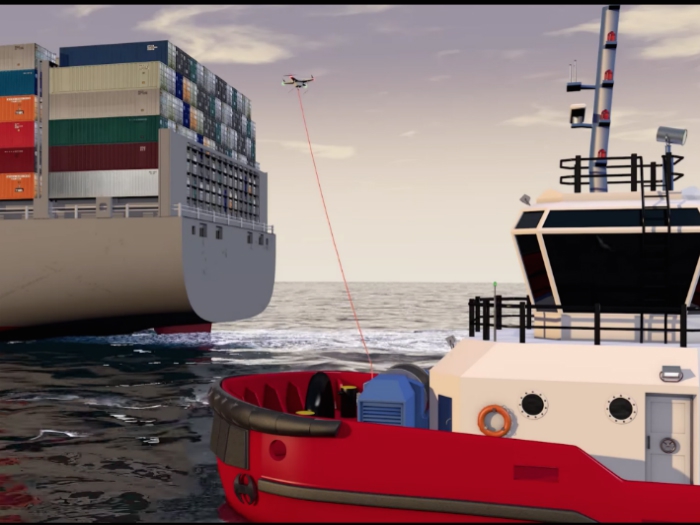 DECEMBER 23, 2017—Dutch towing company Kotug has never been shy about developing and applying new technology to its operations. The family-owned business, which stretches back to 1911, has developed the Rotortug—a tug with a triangular propulsion configuration for improved safety—and the E-Kotug—a hybrid propulsion version of the Rotortug. And it recently won an award for its Zero-Emission Heat Recovery System, which recycles the cooling water heat from the main engines and stores it in a smart latent heat buffer. The stored energy is used for the climate control and to keep the engines warm. Usually, this energy is derived from electrical shore power at a considerable cost.

So it should come as no surprise that Kotug has come up with a way to use drone technology to make towing operations safer and more efficient. Kotug has applied for a patent for the pioneering innovation, which uses a drone to connect the towline to an assisted vessel.

Conventionally, tugboat and crew position themselves in front of and close to the assisted vessel in order to grab the heaving line by hand. By doing so, the tug and crew position themselves in the danger zone, close and even under the (flared) bow of a vessel. A minor flaw in the operation can result in major injuries of the deck crew and/or damage to the tug and the assisted vessel.

A series of tests is scheduled to be performed by Kotug for full operational use of this revolutionary technology for which standard operating procedures will be developed in conjunction with relevant authorities and stakeholders.