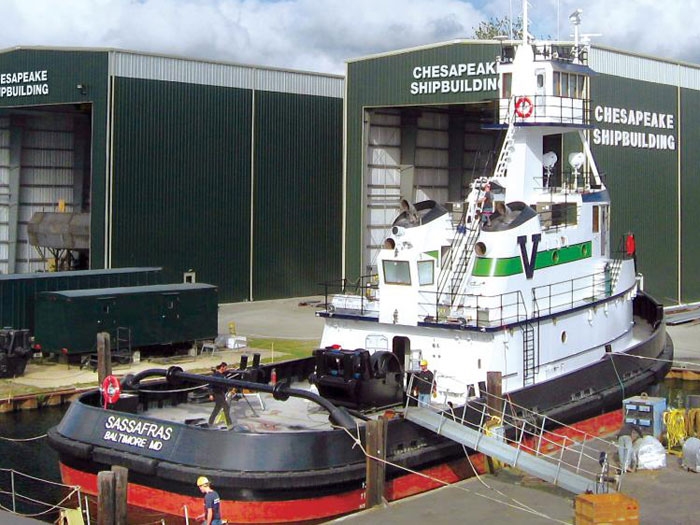 They will be the 15th, 16th and 17th tugboats built for Vane Brothers by Chesapeake Shipbuilding since 2008.

Construction on the first new tug has already begun in one of Chesapeake Shipbuilding's hull fabrication buildings.

The design of the new tugboats will be nearly identical to previous tugboats built for Vane Brothers. Each will be equipped with twin Caterpillar 3512 main engines, producing a combined 3,000 horsepower, and will have a single drum hydraulic winch from JonRie of New Jersey.

All Chesapeake Shipbuilding tugs are built in a controlled indoor environment prior to being moved and launched into Maryland's Wicomico River.

Chesapeake Shipbuilding has recently made significant upgrades to its shipyard to increase its production capacity and efficiency, including acquiring additional land, building two new hull fabrication buildings and investing in additional automated equipment.
The yard is located on 14 acres of level land, with more than 2,400 ft of deepwater bulkhead, along the protected waters of the Wicomico River. It has two large outfitting basins, three side launch systems, plus a ground transfer system and various hull fabrication buildings and shops.