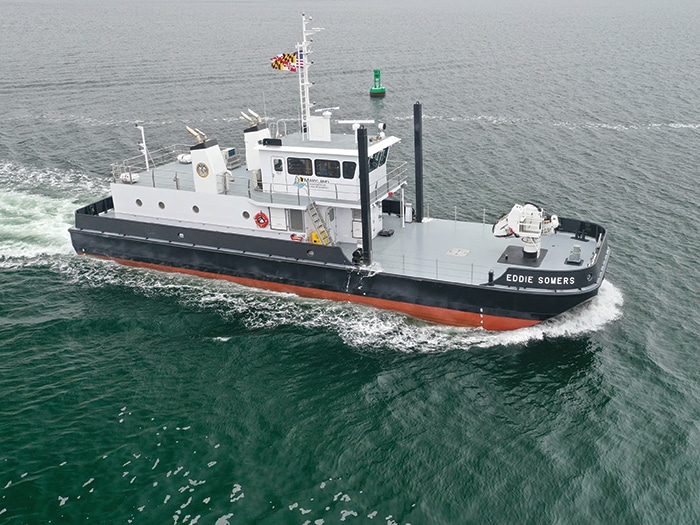 Delivered earlier this year by the Blount Boats shipyard in Warren, R.I., an icebreaking buoy tender ordered in July 2020, the M/V Eddie Somers, is now in service with the Maryland Department of Natural Resources. Homeported at Somers Cove Marina port at Somers Cove Marina in Crisfield, Md., the 94 x 27 foot vessel will replace the M/V J. Milliard Tawes after nearly 50 years’ service.

in addition to placing buoys and performing other functions, the boat will serve as the primary icebreaking asset for Crisfield Harbor and Smith Island, As was the M/V Tawes, the M/V Somers will also be a lifeline to Smith Island when the waters surrounding it freeze over, with the boat clearing a path for supply and shuttle boats.

Under a cooperative agreement with Virginia and the U.S. Coast Guard, the M/V Somers will also provide this service to Tangier Island in Virginia when requested. During heavy ice seasons, all food, fuel, medicine, and emergency transport going to and from the islands are supplied by the vessel.

The Department’s Hydrographic Operations team, based on the Eastern Shore, operates four large boats that perform various duties throughout the Chesapeake Bay. The department’s boats are shallow draft enabling them to serve rivers and shallow areas of the Bay.