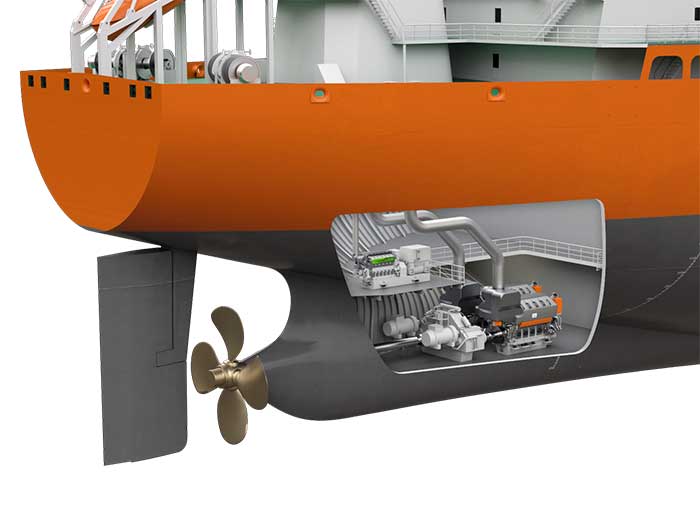 In a challenge to traditional ship design thinking, Wärtsilä and classification society RINA have come up with a propulsion machinery arrangement that, they say, offers a highly efficient, future-proof alternative to the conventional approach of using two-stroke engines for propulsion and four-stroke engines for electric power generation.

The Wärtsilä / RINA arrangement, uses two four-stroke dual-fuel engines, with options for electric power back-up from batteries or a small dual generator when the ship is idle.

The design is claimed to achieve a reduction of up to 50 percent from a ship’s Energy Efficiency Design Index (EEDI) reference level value, and immediate compliance with the IMO’s 2030 targets.

The arrangement features Wärtsilä 31DF engines operating with LNG fuel. Guinness World Records has recognized the diesel version of the Wärtsilä 31 engine type as the world’s most efficient four-stroke diesel engine. The engine has a long track record for reliability and performance, along with the flexibility to utilize future zero-carbon fuels, opening up the pathway to decarbonization.

“At Wärtsilä we are committed to leading shipping into a new era of higher efficiencies, lower operating costs, and greater environmental sustainability,” says Lars Anderson, director, product management & sales support, Wärtsilä Marine Power. “This cooperation project with RINA is fully in line with these ambitions, and we see this propulsion arrangement as being an important and value-adding option for the coming generation of newbuilds.”

“The combination of fewer running components and 100% redundancy, with a single engine capable of handling both propulsion and electric power, even in port, promotes both safety and reliability,” says Trakakis.

At current shipping speeds, the system performance of the new arrangement is said to provide at least the same, or better, efficiency than an equivalent two-stroke design and to have the potential to reduce fuel consumption and emission levels even further at slower speed.