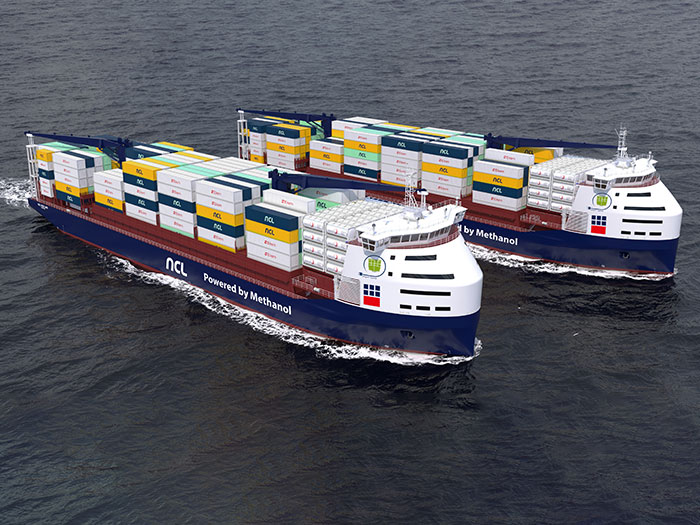 MPC Container Ships will use methanol fueled containerships to open up one of northern Europe’s first green corridors for carbon neutral transportation.

The vessels will operate on 15-year time charters to North Sea Container Line AS (NCL), backed by CoAs (contracts of affreightment from various parties, including a 15-year CoA with Norwegian industrial group Elkem ASA, which has a 40% ownership stake in NCL.

The contract price of $39 million per vessel is covered by the contracted cash flows from the 15-year time charter with NCL at an initial rate of about EUR 16,300/day (about $16.000/day), before inflationary adjustment mechanisms.

The vessel owning entities will be majority owned by MPCC (90.1%) together with Topeka MPC Maritime AS (9.9%), a joint venture between Topeka Holding AS (a zero emission shipping company owned by Wilhelmsen Group) and MPC Capital AG.

Technical management will be by Wilhelmsen Ahrenkiel Ship Management.

“I am excited to announce the order of two carbon-neutral newbuildings with long-term time charters,” said MPC Container Ships CEO Constantin Baack. “Together with our partners NCL and Elkem, this project allows us to set up a green transportation corridor in Northern Europe, proving our ability to identify and execute on opportunities that are accretive whilst allowing us to make the right move towards a further decarbonization of the fleet. It also demonstrates that we can meet ambitious environmental goals by joining forces with like-minded partners and we are looking forward to facilitating a green container shipping supply chain along the Norwegian coastline.”

Elkem, which is one of the world’s most environmentally-friendly manufacturers of silicon-based materials, says that the two newbuild ships will replace three of NCL’s current diesel-powered vessels, which will be phased out from operations.

“Our operations require a significant amount of transport across the value chain, including sea transport as the most climate-friendly mode of transport for bulk goods,” said Elkem CEO Helge Aasen. “These state-of-the-art vessels will further increase our efficiency through increased capacity and can potentially cut net CO2-emissions from 45 % up to 100% through the use of green methanol. This contract with NCL and the innovative newbuilding project with MPC Container Ships ASA is a great example of how operational excellence and sustainability can go hand in hand.” says Elkem’s CEO, Helge Aasen.

“We very pleased to have once again advised MPCC on an important deal with regards to the decarbonization of the maritime industry,” said Finnern. “This innovative project will play a significant role in the creation of one of northern Europe’s first green corridors for carbon neutral transportation. That MPCC opted for WFW to assist them again highlights our standing as the ‘go to’ law firm for sustainable shipping expertise.”