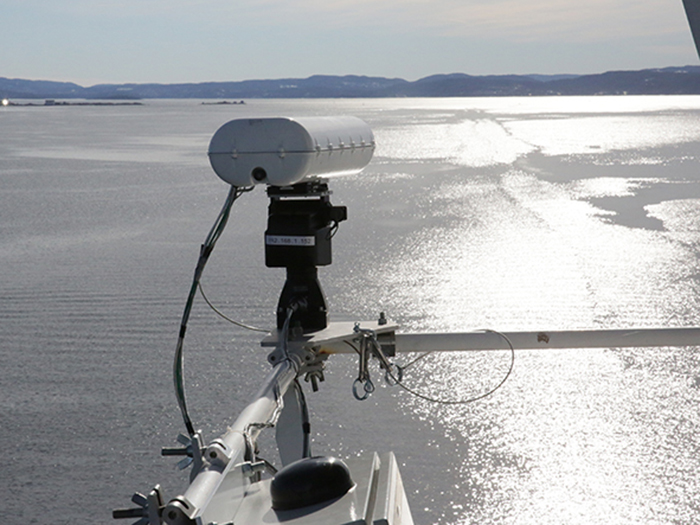 Norwegian operator Color Line has been trialing Ladar, a light-based laser technology anti-collision system designed to identify floating objects on or under the surface of the water, including drifting fishing nets, logs, containers and ice, as well as plastic and other flotsam.

“We can detect items that lie well ahead, as the ship is sailing,” says Sverre Dokken, founder of Limassol, Cyprus, headuartered Offshore Monitoring, developers of Ladar.

The system was recently put to the test on a Color Line ferry in the seas around Scandinavia, then on a test vessel in the Mediterranean.

“Since the beginning of the Ladar system development, we have placed great emphasis on testing the system’s performance in every way possible, not only in controlled environments in the laboratory, but also in real-life settings,” Dokken says. “We recently had the opportunity to set up the system on board Color Magic and execute a series of tests and benchmarks along the Oslo-Kiel route. The team first detected objects on the route sailing from Oslo to Kiel, then ran the same tests on the return leg to verify the identity of objects detected on the first pass.
“

“The test was a success. First we identified a series of objects, and then we were able to verify the findings,” Dokken says.

Color Line was particularly interested in learning more about the moving sandbanks in Kattegat, the stretch of water between Denmark and Sweden.

“We want to exploit wind and current conditions in order to reduce resistance and lower fuel consumption, and this sometimes involves varying from the pre-determined course,” says Jan-Helge Pile, Technical Manager in Color Line.

By informing the bridge of the real-time status of moving sand banks, Ladar allows Color Line’s officers to perform safe deviation from the set course, maximizing fuel efficiency without increased risk of grounding.

“We have a theoretical model, but we need to know more about how Ladar can perform,” says Dokken. “These tests gave us an idea of what it could actually do, and how close we could get to the design optimum.”

The Color Line tests confirmed many theories, but presented some surprises as well.

“The system we tested was better at detecting smaller items than we had anticipated, but not as good on metal objects in still water,” says Dokken.

The reason for this: waves caused by wind increase disturbance in the water around an object, making it easier to detect.

“This includes up to storm level winds,” Dokken says. “The more activity in the water, the better.”

Even when Ladar identified submerged objects, the crew could not always determine exactly what had been detected.

“To address this issue, we re-constructed the test under controlled circumstances on our test vessel in the Mediterranean,” says Dokken We deployed plastic and metal objects for the system to identify. Then we stopped when unknown objects were detected, in order to verify their status and log characteristics to include in the next round of testing.”

While a single Ladar unit was deployed on Color Magic, two were used in the Mediterranean.

“With two units operating, we could check results against each other,” says Dokken. “This added an extra dimension, and we improved results on both metal and plastic objects.”

In all, seven days of continuous testing were logged.

The development team is currently using test results to create mockups and further test variables. “We are building a new version of Ladar based on these results,” Dokken confirms.

The new version is a multi-spectral unit employing 16 transmitters on 16 wavelengths. The prototype is currently under construction, with a target date end of 2020.

“Now we are looking for more test partners,” Dokken says. “In particular we would like to enlist the fishing fleet, because we know they need to be able to differentiate between fish and flotsam.”

High-speed vessels such as ferries are also on Dokken’s wish list. “They tend to pick up more debris due to shallow running depths.” he says. “The hulls skim the surface and draw debris into cooling systems. This causes delays and equipment damage. High speed vessels also run the risk of hitting objects at speed, causing severe structural damage, so they should be prime candidates to benefit from Ladar technology.”

Ladar has a range of up to one nautical mile and is speed independent. “A longer-range setting gives shallower depth penetration, while shorter range penetrates deeper into the water,” Dokken says.