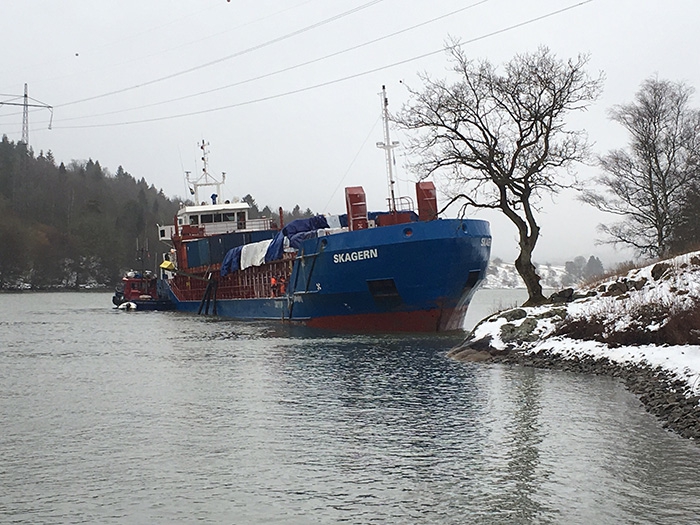 MARCH 10, 2017 — The 3,171 dwt Netherlands-flagged general cargo ship Skagern has run aground in the Gota River southwest of the locks in Trollhättan, Sweden.

The Swedish Maritime Administration reports that the grounding occurred at 07:25 on Thursday morning following technical problems on board.

Eight people were on board and no injuries are reported. The ship is loaded with lumber / wood products and was on its way to Hull in the U.K. There are no dangerous goods on board.

The ship has now been secured to the shore and is considered safe.

There is a small amount of water in a small ballast tank in the bow. Divers inspected the hull on Thursday and located a small crack which is probably the cause of the leak in the ballast tank.

Local police boarded the vessel to conduct routine sobriety tests and at this stage do not suspect any wrong doing.

Salvage efforts are tentatively set to begin Saturday, but the ship will have to be emptied of cargo prior to being moved.

The channel is now temporarily closed to traffic. The Swedish Maritime Administration says the traffic stoppage will last for a week from Friday morning and had been scheduled earlier to allow for civil works in Gothenburg.