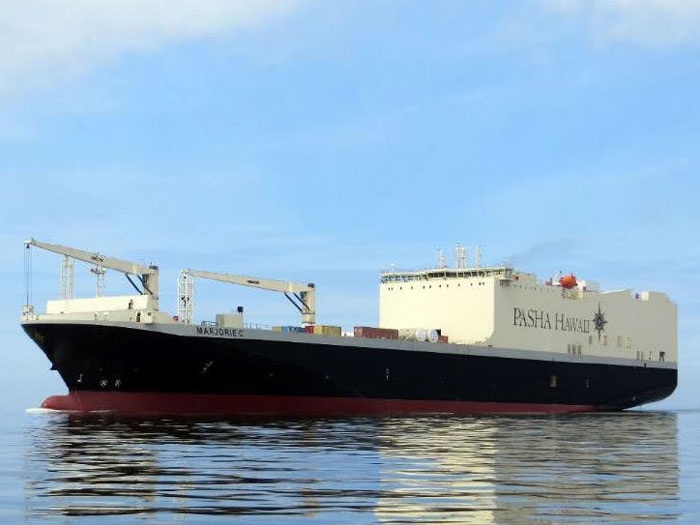 The 692 feet long MV Marjorie C has a vehicle shipping capacity of 1,100 units, the ability to carry 1,400 TEUs above and under deck, and over-high/over-wide cargoes on ten workable decks.

The vessel’s design incorporates the highest level of operating efficiencies as well as reduced environmental impacts. The sister vessel, Jean Anne, was Pasha Hawaii’s first Jones Act vessel and has been serving the Hawaii/Mainland trade since March 2005.

“We are pleased to begin our expanded service in the Hawaii/Mainland trade lane with our new ConRo. Constructed in the U.S., manned by U.S. crews, and built with state-of-the-art technical capabilities by the skilled men and women of VT Halter Marine, Marjorie C is an essential addition to our fleet, providing streamlined, environmentally friendly capacity to the trade,” said George PASHA, IV President and Chief Executive Officer, Pasha Hawaii

“VT Halter Marine is proud to have delivered the MV Marjorie C to our very valued customer, George Pasha and the entire team at Pasha Hawaii. This delivery could not have been accomplished without the team efforts of our two companies,” said VT Halter Marine CEO Bill Skinner. “We look forward to continuing our relationship as they grow their business with the acquisition of Horizon Lines which is expected to take place by the end of the second quarter 2015.”