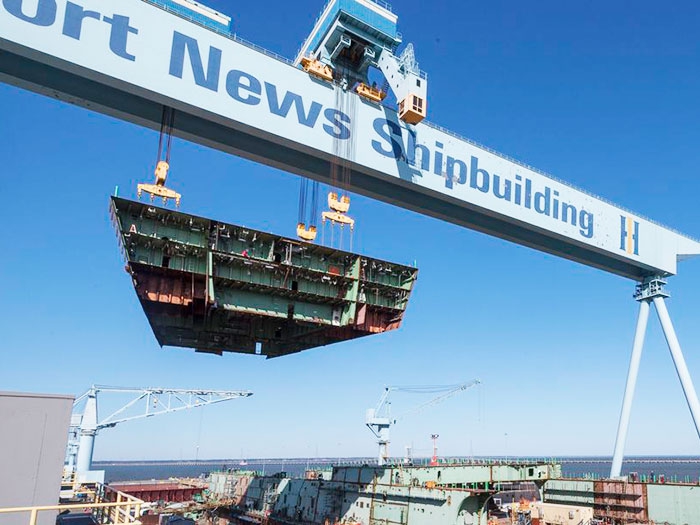 The shipbuilder anticipates hiring almost 7,000 people, including the creation of 2,000 new jobs, in the City of Newport News over the next five years.

These new hires will support Newport News Shipbuilding’s contract to build significant components for the new Columbia-class submarines, along with its existing product lines, including the construction of Virginia-class submarines, the refueling and complex overhaul and defueling of the Nimitz-class aircraft carriers, and the construction of Ford-class aircraft carriers.

In addition to this significant hiring initiative, Newport News Shipbuilding is retraining employees over the next five years to incorporate new digital shipbuilding technology and is making nearly $1 billion in capital investments in the company’s facilities and technology infrastructure.

“Newport News Shipbuilding’s success is important not just for Hampton Roads, but for the entire Commonwealth. Therefore, it is critical that we support growth of this magnitude with an innovative partnership between state agencies that will address the company’s workforce and training needs and supply a pipeline of skilled talent,” said Governor Northam. “We have a responsibility as a Commonwealth to ensure that every single one of these jobs gets filled with a skilled and trained Virginian who is ready to succeed. One of my highest priorities as Governor is to provide workforce solutions that connect Virginians to the skills, training, and opportunities required to meet companies’ needs in high-demand sectors. I thank Huntington Ingalls Industries and Newport News Shipbuilding for its long-term commitment to the Commonwealth, and applaud all the state partners involved in this groundbreaking initiative.”

“As we continue to transform our business, we look forward to recruiting, training and retaining talented men and women who will help meet our workforce needs now and into the future,” said Newport News Shipbuilding President Jennifer Boykin. “This effort requires strong community leadership. That’s why we are excited about this partnership with the Commonwealth. Working with government, business and educational systems ensures we have the additional resources necessary to continue our investment in our greatest resource—our people.”

In 2016, the Virginia General Assembly approved the Advanced Shipbuilding Production Facility Grant Program making available up to $46 million in capital funds to Newport News Shipbuilding to help the company upgrade its foundry and invest in facilities necessary to build Columbia-class submarines. The company will be eligible for these grants if it makes capital investment of at least $750 million and creates at least 1,000 jobs in the Columbia-class submarine program.

VEDP will support a portion of Newport News Shipbuilding’s job creation and retraining through its state-funded Virginia Jobs Investment Program (VJIP). VJIP provides consultative services and funding to companies creating new jobs or experiencing technological change to support employee training activities. CJIP funding will allow Newport News Shipbuilding to retrain its current workers with skills necessary to support the company’s digital transformation that is replacing legacy manufacturing techniques with high-tech alternatives. In addition to VJIP funding for the training, the company is benefitting from a GO Virginia grant and state funding to Old Dominion University to stand up the first U.S. workforce program in digital shipbuilding. The Virginia Digital Shipbuilding Workforce Program will develop a curriculum that can be shared with education and training partners statewide to prepare the current and future workforce for digital manufacturing jobs in shipbuilding.

The VEC will continue to support Newport News Shipbuilding’s job creation through its Career Works Centers in Hampton and Norfolk, which host hiring events, pre-screen applicants, and support employer interviews for electricians, pipefitters, machinists, painters, ship fitters, welders, electronic technicians, and firewatchers. To date, over 300 job seekers, including many veterans, have participated. The Career Works teams will continue to host events and promote the opportunities in this industry. The VEC will also work with regional offices outside of Hampton Roads to host hiring events and to identify those individuals with the right skill sets who are looking for employment and are willing to relocate to Newport News.

The New Economy Workforce Credential Grant Program (WCG) was developed during the 2016 Virginia General Assembly Session to create and sustain a supply of credentialed workers to fill high-demand occupations in fields which support the state’s economy while making the attainment of these credentials more affordable. In FY17, WCG funds supported 441 enrollments in welding, pipefitting, machining, milling, and electrical. In FY18, that number rose to over 767 enrollments. The General Assembly also provided funding from January 2012 through June 2014 for marine-skilled trades training, and in 2015, the Hampton Roads Marine Skilled Trades Training Program won the National Exemplary Program award from National Council for Workforce Education. This program has allowed Newport News Shipbuilding to partner with three regional community colleges to offer three-week pre-hire training programs in seven trades that have produced over 400 trainees to date, of whom 95 percent have been offered jobs at the shipyard.

The Virginia Office of Veterans and Defense Affairs plans to increase communication with the naval base and other military installations statewide to help Newport News Shipbuilding recruit transitioning military members.

“The City of Newport News and Newport News Shipbuilding have a 132-year partnership in accomplishing great things together,” said City of Newport News Mayor McKinley Price. “We have supported the Herbert H. Bateman Virginia Advanced Shipbuilding Carrier Integration Center and the award-winning Apprentice School which was founded in 1919. More recently, we have partnered on the Joint Manufacturing Assembly Facility, upgrades to the Foundry, and in a new building at Brooks Crossing. Today’s announcement will support the workforce needs of the region’s premier corporate citizen and help ensure that our workforce is prepared to meet Newport News Shipbuilding’s demand for skilled talent.”