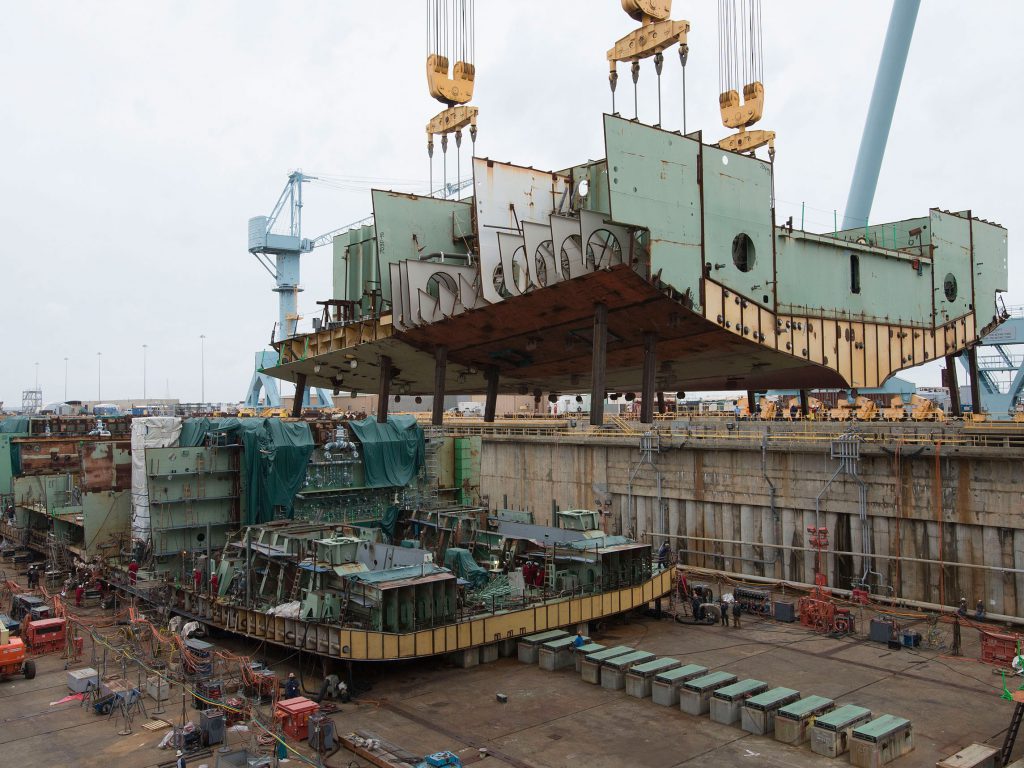 Newport News shipbuilders added a 965-ton structure comprising two pump rooms to the nuclear-powered aircraft carrier John F. Kennedy (CVN 79) earlier this month. This is the 21st superlift that has been placed in the dry dock since the ship’s keel was laid in August 2015

The superlift was made with more than twice the amount of outfitting accomplished as compared to the equivalent superlift on Kennedy’s predecessor, Gerald R. Ford (CVN 78).

“We are continuing to make good progress on the Kennedy with a focus on reducing cost,” said Mike Shawcross, Newport News’ vice president, CVN 79 construction. “Not only are we taking the lessons learned from the first ship of the class, the Ford, and applying them to our work on Kennedy, we are also approaching the construction of this ship differently to further bring down the cost. By installing most of the outfitting before the section goes into dry dock, we are able to significantly reduce man-hours, which translates to cost savings for the Navy and the American taxpayer.”

The superlift, comprising two pump rooms, is 80 feet long and about 100 feet wide. The section is complete with grating, pumps, valves, pipe, electrical panels, equipment mounting studs, lighting and other outfitting components. On Ford, a large number of those components were installed after the superlift was placed in the dry dock.

The aircraft carriers are being built using modular construction, where smaller sections of the ship are welded together to form large structural units, equipment is installed, and the large units are lifted into the dry dock using the shipyard’s 1,050-metric ton gantry crane, one of the largest in the Western Hemisphere.

Kennedy is on track to be completed with 445 lifts, 51 fewer than Ford and 149 less than USS George H.W. Bush (CVN 77), the last Nimitz-class carrier.

The superlift shown in the video is the twenty-first placed in the dock since the ship’s keel was laid in August 2015. Kennedy is now 17 percent complete.