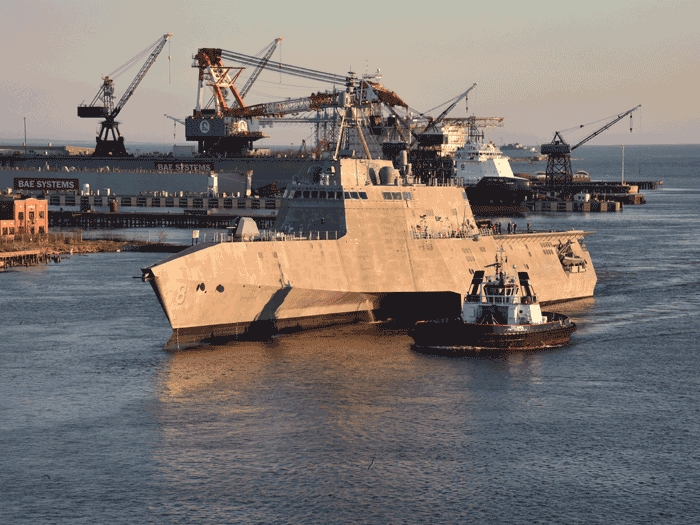 Even before it was formally submitted as the Annual Long-Range Plan for Construction of Naval Vessels for Fiscal Year 2016, a draft of the Navy’s latest shipbuilding plan was floating around Washington and being seen by defense commentators as likely to have a short shelf life. The plan holds to the Navy’s goal of reaching a 308-ship battle force over the next five years. But an ongoing Force Structure Assessment (FSA) is under way that will likely see that number raised, the U.S. Naval Institute quotes naval analyst Bryan Clark of the Center for Strategic and Budgetary Assessments as saying. Clark, a former special assistant to past Chief of Naval Operations Adm. Jonathan Greenert, told USNI News that the plan is “very provisional until the Navy comes up with a new set of force structure requirements.” He added that Congress is “already weighing in with additional ships they want to build, and the new administration is going to obviously have things they want to do differently.”

The draft is an updated version of the plan submitted last year and continues to be based on the 2012 Force Structure Assessment (FSA) “to meet strategy and presence requirements and maintain a healthy industrial base.”

The problem with this is that the world has gotten a lot more dangerous since the 2012 FSA was compiled. Among other things, Vladimir Putin has invaded and annexed Crimea and subsequently pulled out various ploys from the Soviet era Cold War play book and China has been building whole new Spratley islands and sticking airstrips on them, essentially creating large (if stationary) aircraft carriers. Turn on the BBC World Service News any day and you’ll be able to add to the list.

The upshot is that the next FSA is likely to produce a need for a larger submarine fleet and more cruiser/destroyer-type vessels (CRUDES) than envisaged in the 2012 FSA.

Meantime, the draft shipbuilding plan says that since the 2012 FSA was completed there have been some minor adjustments in the Navy’s forward deployed posture, warfighting prioritization, and structure that have seen the 2012 FSA objective for 306 ships increased to 308 as a result of these changes. Here’s what they consist of:  Fleet ballistic missile submarines: 12; Nuclear-powered aircraft carriers: 11; Nuclear-powered attack submarines: 48; Nuclear-powered cruise missile submarines* 0;  Large, multi-mission, surface combatants: 88; Small, multi-role, surface combatants: 52; Amphibious Warfare ships: 34;Combat logistics force ships: 29; Support vessels: 34.

While all this is aimed at producing pretty much the fleet seen as needed in the 2012 FSA, it seems evident that the next FSA will actually result in a requirement for a larger battle force.

LAWMAKERS SEEK MORE SHIPS
The FY 2017 Defense Authorization Act is now churning through the Congressional hopper and legislators are intent on getting ahead of the curve.

But you don’t always get what you ask for—and when it comes to Navy shipbuilding and Congress sometimes it will be just a bit different, even when it’s more.

The House last month authorized $20.6 billion for shipbuilding, $2.3 billion above the President’s budget. As we’ll discuss later, how it wants to find the money is controversial and sets things up for resolution by a House-Senate conference and possibly even a veto.

Seapower and Projection Forces Subcommittee Chairman Rep. Randy Forbes, (R-VA) says that between the shipbuilding account and the National Sea-Based Deterrence Fund (set up in the FY 2015 act as a holding fund dedicated to the Ohio replacement ballistic missile submarine program), that $20.6 billion is the highest level of shipbuilding funding, accounting for inflation, since President Reagan was in office.

In addition to shifting the amount requested by the President for the Ohio replacement into the NSBDF, the House measure expands the authorities in the NSBDF to include “continuous production” of Ohio class replacement submarines, allowing the Navy to procure components such as missile tubes at substantially lower cost.

The House measure also includes an amendment by Rep. Bradley Byrne (R-AL) that would prevent any funds from being used to “select only a single contractor for the construction of the Littoral Combat Ship or any successor frigate class ship program” until the Secretary of the Navy certifies a number of requirements to Congress—effectively delaying progress on the Navy’s down select from two LCS variants to one until the next administration takes office.

SENATE VERSION STILL IN WORKS
Right now, the Senate Armed Services Committee’s version of the Act was coming up for consideration by the full Senate. As drafted, it contains a number of similarities to the House version, with one major difference being the future of the LCS.

In provisions relating to the Ford-class Aircraft Carrier, the Senate Arms Service Committee version directs a review of the ships’ Advanced Arresting Gear (AAG) program and meantime prohibits future AAG procurement funding, saying, the acquisition “unit cost of this troubled program has breached critical cost growth thresholds, warranting a reassessment of the program and a consideration of alternatives.”

It limits funds until the Navy establishes lower end cost targets of $11 billion and $12 billion for the USS John F. Kennedy

There’s no good news for LCS fans in the Senate. Its bill prohibits revisions to or deviations from the current LCS acquisition strategy, which includes procurement of both LCS designs in 2017, a down-select to a single variant no later than 2019, and a reduction in the inventory objective to 40 ships.

It also reduces authorization for the LCS by $28 million “due to unjustified unit cost growth” and cuts $59 million for LCS mission packages.

What’s more, it prohibits the use of funds to enter into or prepare to enter into a sole-source contract for a Joint High Speed Vessel (JHSV) or Expeditionary Fast Transport (EPF).

“In the last two years, funds were appropriated for two of these ships that Navy did not request and were not authorized by the NDAA,” says the committee. “This provision is a necessary safeguard to prevent wasteful earmarks.”

The Senate measure directs the Secretary of the Navy to report to Congress on how the Navy will transition the Ohio-class replacement submarine program from cost-plus to fixed-price contracts as soon as possible.

Picking up on a March 2016 GAO report that said the Navy should reconsider its approach to warranties for correcting construction defects, the Senate Armed Services Committee draft “directs the Secretary of the Navy to structure contract terms such that shipbuilders do not earn profit for correcting construction deficiencies following delivery that are determined to be their responsibility.”

The Senate version authorizes an extension to a Jones Act waiver pertaining to the procurement of dry docks, which would be necessary to build Navy ships.

The Senate Armed Services Committee measure also would slow the Navy’s efforts to take existing ships out of service. The measure would: 1. Prohibit funds from being used to inactivate guided missile cruisers or dock landing ships or place ships in these classes into an extended modernization period, unless prescribed criteria are met; and 2. Prohibit funds from being used to inactivate existing mine countermeasures systems until equivalent or better capabilities are fielded.

PAYING FOR IT ALL
While the levels of both House and Senate Armed Services Committees’ total defense budget proposals are line with the Administration’s total, the House version only does so with a bit of smoke and mirrors: it funds the Pentagon’s Overseas Contingency Operations (OCO) only until April 20, saying “The Chairman’s expectation is that a new President will assess the national security landscape and submit a supplemental budget request—as is traditional in the first year of a new administration.”

Calling that move “budget gimmickry,” Secretary of Defense Ash Carter said, in a speech delivered May 17, that “it raids war funds in a time of war, when we have men and women deployed in operations in Afghanistan, Iraq and Syria. It also threatens the budget stability that undergirds all of the reforms, investments and initiatives that the Pentagon has been working on. And it threatens the readiness of the force—an actual contrast to the narrative its proponents propound.”

Secretary Carter noted that the passage of last fall's Bipartisan Budget Act “gave us some much needed stability to plan and build for the future, after years of gridlock and turbulence.”

“That budget deal set the size of our budget,” he continued, “and with this degree of certainty, we focused on its shape and building the FY 2017 budget we’ve submitted and I’ve described—changing that shape in fundamental but carefully considered ways to adjust to a new strategic year end to seize opportunities for the future.

“But the budget stability that was supposed to last for two years is already under threat after only six months with a proposal to underfund DOD's overseas warfighting accounts by $18 billion and spend that money on programmatic items we didn't request. This approach is deeply troubling.

“If a final version of the NDAA reaches the President this year and includes a raid on war funding that risks stability and gambles with war funding, jeopardizes readiness and rejects key judgments in the department,” said Secretary Carter, “ I’ll be compelled to recommend that he veto the bill. I’m hopeful, however, that we can work with Congress to achieve a better solution. Our warfighters deserve nothing less because our mission is a deadly serious one.”