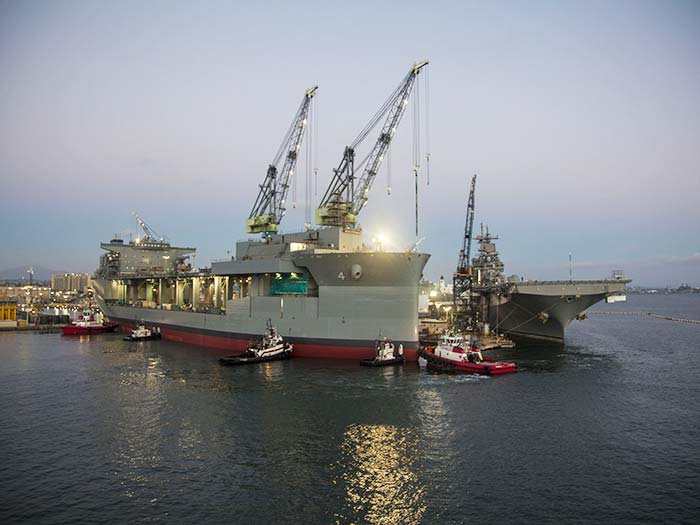 USNS Hershel "Woody" Williams (ESB 4) seen preparing to be floated out and launched at the General Dynamics NASSCO shipyard, Aug. 19. In the background, USS Boxer (LHD 4) is undergoing maintenance and modernization

NAVSEA notes that Integrated Trials combine Builder’s and Acceptance Trials, allowing for the shipyard to demonstrate to the Navy’s Board of Inspection and Survey the operational capability and mission readiness of all the ship’s systems during a single underway period.

During trials, the shipbuilder conducted comprehensive tests to demonstrate the performance of all of the ship’s major systems.

“During the trials we were able to conduct a number of tests including full power propulsion, steering and anchoring,” said Capt. Scot Searles, strategic and theater sealift program manager, Program Executive Office, Ships. “ESBs are versatile platforms, and the ship handled extremely well demonstrating its readiness for delivery.”

Hershel “Woody” Williams is the second platform of the ESB variant. ESBs have a maximum speed of 15 knots and range of 9,500 nautical miles. The ship can hold 100,000 gallons of potable water and 350,000 gallons of JP-5 jet fuel. Acting as an expeditionary sea base, ESB 4 is optimized to support a variety of maritime based missions including special operations force and airborne mine counter measures. The ESBs include a four-spot flight deck and hangar and are designed around four core capabilities: aviation facilities, berthing, equipment staging support, and command and control assets.