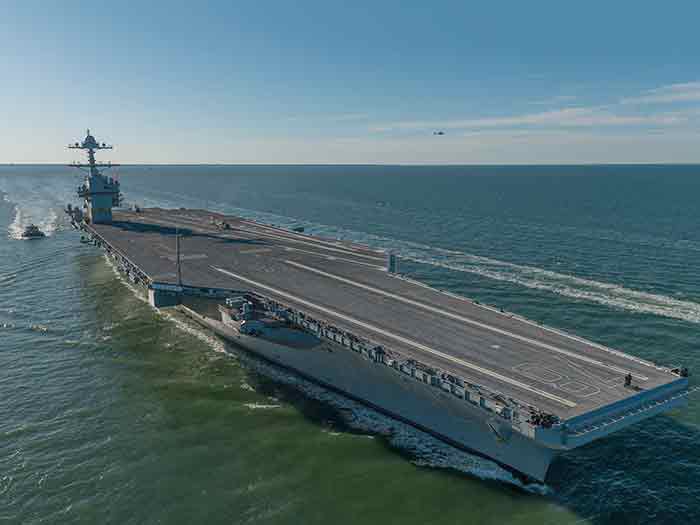 MARCH 19, 2018 – The Navy today issued an RFP to Huntington Ingalls Industries Newport News Shipbuilding Division seeking detailed pricing on the costs of a block buy in FY2019 of the next two Gerald R. Ford-class aircraft carriers.

“In keeping with the National Defense Strategy, the Navy developed an acquisition strategy to combine the CVN 80 and CVN 81 procurements to better achieve the Department’s objectives of building a more lethal force with greater performance and affordability,” said James F. Geurts, Assistant Secretary of the Navy, Research Development and Acquisition. “This opportunity for a two-ship contract is dependent on significant savings that the shipbuilding industry and government must demonstrate. The Navy is requesting a proposal from HII-NNS in order to evaluate whether we can achieve significant savings.”

The two-ship buy is a contracting strategy the Navy has effectively used in the 1980s to procure Nimitz-class aircraft carriers and achieved significant acquisition cost savings compared to contracting for the ships individually. While the CVN 80/81 two-ship buy negotiations transpire, the Navy is pursuing contracting actions necessary to continue CVN 80 fabrication in fiscal year (FY) 2018 and preserve the current schedule. The Navy plans to award the CVN 80 construction contract in early FY 2019 as a two-ship buy pending Congressional approval and achieving significant savings.

Wittman and Wicker serve as Chairmen of the House and Senate subcommittees that oversee the Navy and Marine Corps.

“The RFP released by the Navy today is a great step towards strengthening the Fleet. A dual procurement allows the U.S. Navy to build to a fleet of 12 aircraft carriers more quickly as prescribed by the FY18 National Defense Authorization Act – which established that the Navy should maintain 355 ships, including 12 aircraft carriers,” Rep. Wittman said. “This dual buy would be beneficial to both the taxpayers and to our maritime industrial base as it shows that Congress is committed to the thousands of workers who build and maintain aircraft carriers every day. Smart acquisition has the potential to save $2.5 billion. We need to give the Fleet the ships it needs to meet the challenges of today and prepare for the threats of tomorrow.”

“The bottom line is that this block buy will save billions for taxpayers, and the Navy is now on an accelerated timeline to meet its 12-carrier requirement,” Sen. Wicker said. “I want to congratulate Secretary Spencer and his team for their bold leadership on setting this plan in motion. They have my full support, and I am confident that America’s world-class shipbuilders and suppliers are up to the task.”