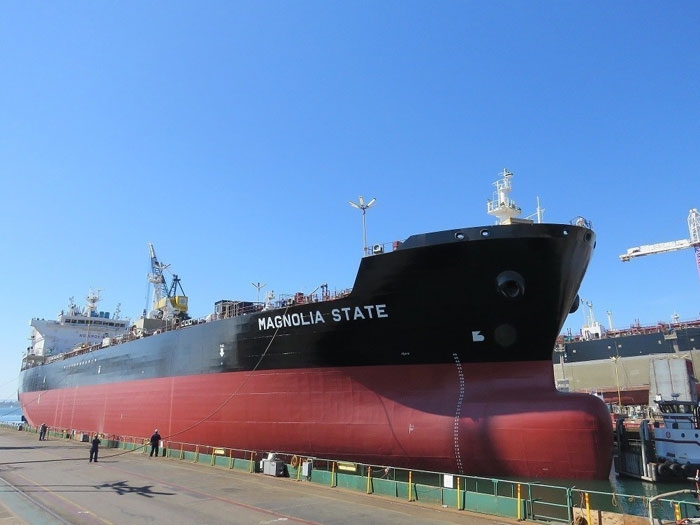 U.S. Representative Scott Peters spoke at the ceremony, and the ship’s sponsor, Mrs. Trang Cormack, christened the ship with the traditional break of a champagne bottle alongside the ship.

The ECO Class tanker, the Magnolia State, is the second of a five-tanker contract between NASSCO and APT that covers the design and construction of five 50,000 deadweight ton, LNG-conversion-ready product carriers.

The 610-foot-long tankers are being built to a new ECO design by DSEC, a subsidiary of Daewoo Shipbuilding & Marine Engineering (DSME) of Busan, South Korea. The design’s fuel efficiency features include a G-series MAN B&W ME slow-speed main engine and an optimized hull form.

The tankers will also have dual-fuel-capable auxiliary engines and the ability to accommodate future installation of an LNG fuel-gas system.

On delivery, the Magnolia State will join the ranks of the most fuel-efficient and environmentally friendly tankers in the world.

“The revolutionary ECO Class provides our customers with an alternative option for transporting product that is cost-effective and friendly to the environment,” said Fred Harris, president of General Dynamics NASSCO. “Like the Magnolia State, each ship designed and constructed at NASSCO is built with pride and ownership. Our shipbuilders know they’re not just building a product tanker – they’re building a vessel that helps fuel our economy.”

“We look forward to taking delivery of our second ECO Class tanker from NASSCO. This is another example of American Petroleum Tanker’s commitment to building our fleet and servicing our customers. And we thank NASSCO for their continued support which paved the way for this important milestone to be achieved,” said Robert Kurz, vice president of Kinder Morgan Terminals and president of American Petroleum Tankers

“San Diego’s shipbuilding industry currently supports as many as 14,000 local jobs,” said U.S. Representative Scott Peters. “Part of this is due to the Navy’s rebalance to the Pacific, but it’s also due to significant private contracts such as this one. The Magnolia State created good jobs for San Diegans and will provide a safe, more efficient, and cleaner way transport fuel across the ocean. It was an honor to be present at the start of is construction, and it’s an honor to see her off.”

The Magnolia State, along with others in the ECO Class, are the first vessels in the Jones Act fleet to obtain a PMA+ class notation, representing compliance with one of the highest standards of human factors in engineering design. The PMA+ notation was created to facilitate safe access to vessel structure and spaces in ways that are rooted in the fundamentals of human ergonomics.