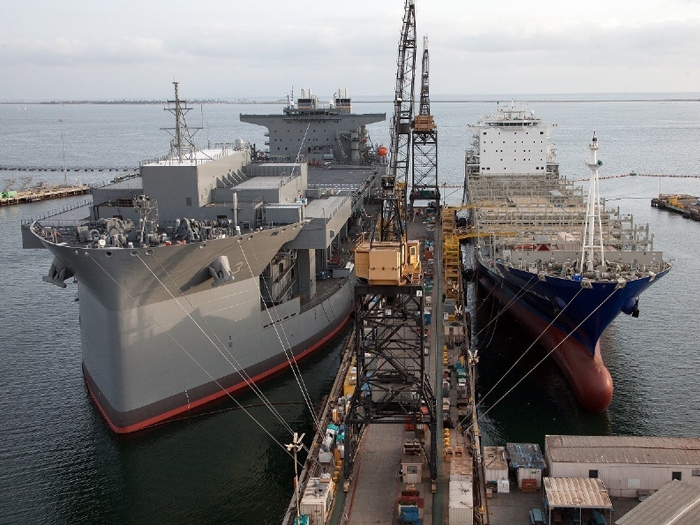 Delivered to the Navy in June, the USNS Lewis B. Puller is the first ship in the Expeditionary Base Mobile (ESB) class.

Previously classified as a Mobile Landing Platform Afloat Forward Staging Base (MLP AFSB), the added capabilities to the 784-foot long ship include a 52,000 square-foot flight deck, fuel and equipment storage, mission planning spaces and accommodations for up to 250 personnel.

In addition, the ship is designed to support MH-53 and MH-60 helicopters, and will be upgraded to support MV-22 tilt rotor aircraft.

In October, NASSCO shipbuilders began construction on a second ESB, and in December 2015, the U.S. Congress approved $635 million in funding for a third ESB.

As part of a two-ship contract signed in December 2012 with TOTE, the 764-foot long Marlin Class containerships are the largest dry cargo ships powered by LNG, making them the cleanest cargo-carrying ships anywhere in the world.The Isla Bella’s sister ship, the Perla Del Caribe, is currently under its final stages of construction at the NASSCO shipyard and is scheduled to be delivered to TOTE during the first quarter of 2016.

The ship is the first delivered under a contract between NASSCO and APT that covers the design and construction of five 50,000 deadweight-ton, LNG-conversion-ready product tankers with a 330,000 barrel cargo capacity. The 610-foot-long tankers are being built to a new “ECO” design that will make them 33 percent more fuel-efficient than the previous five tankers built by NASSCO for APT between 2007 and 2010.

“The delivery of these three lead ships, the USNS Lewis B. Puller, the Isla Bella, and the Lone Star State, demonstrates NASSCO’s strength in designing, building and delivering a diverse portfolio of world-leading vessels for both government and commercial customers,” said Fred Harris, president of General Dynamics NASSCO. “The ships we build are affordable, tough and help fuel America’s economy and strengthen national security.”