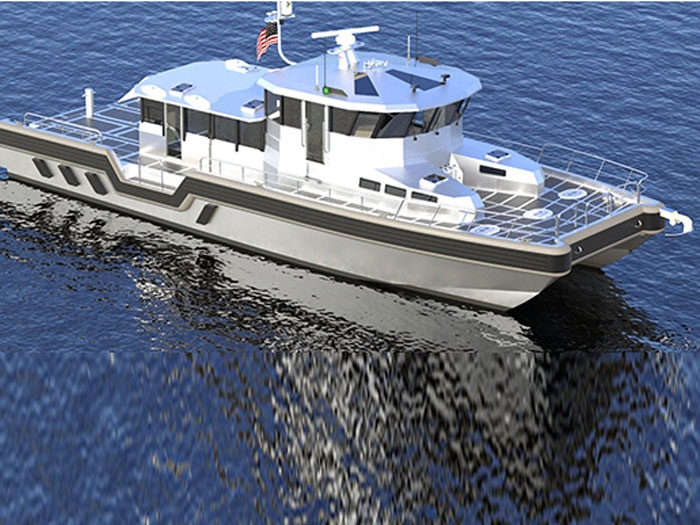 JUNE 5, 2014 —  Louisiana Governor Bobby Jindal yesterday presented Metal Shark Boats with the Governor’s Award for Entrepreneurial Excellence. The award is periodically awarded to businesses that grow and provide more opportunity, more jobs, and more commerce for the State of Louisiana.

Metal Shark Boats has grown from an employment of 75 in 2012 to 200 employees today. Headquartered in Jeanerette in Iberia Parish, Metal Shark Boats continues to expand production of boats up to 40 feet in length at its original shipyard, filling customer orders for the U.S. Coast Guard, the U.S. Navy, law enforcement and conservation agencies and commercial companies.

Metal Shark Boats also is further expanding in Louisiana, building a new shipyard to manufacture 48-foot to 75-foot boats for commercial pilots, ports and government agencies. That 60,000-square-foot facility will open by July in Franklin, La. in nearby St. Mary Parish.

Metal Shark Boats and Governor Jindal announced expansion plans in March 2013 that would take the company from 144 to 232 employees by 2017. The company has added 56 employees since that announcement and is approximately two years ahead of the projected hiring schedule. Founded as Gravois Aluminum Boats three decades ago in Jeanerette, the company initially produced custom recreational boats revered by Gulf Coast fisherman. The challenge of declining recreational sales led the company to refocus its production on military and commercial models, where it has excelled, manufacturing a current average of 170 boats per year.

Governor Jindal said, “I’m proud to present Metal Shark Boats with this award to commemorate the company’s success and economic growth here in Jeanerette and in Franklin. We’ve now visited Metal Shark Boats three times since 2012, and each time we leave this innovative company is already making plans for further expansion and more jobs. Very few companies illustrate the entrepreneurial spirit of Louisiana like Metal Shark Boats, which has expanded its facilities to create more high quality boats that will better protect the men and women of the U.S. military and law enforcement.

Current Metal Shark Boats production includes a nearly 500-boat U.S. Coast Guard contract for which the company has built more than 80 of the 29-foot response boats and a pair of U.S. Navy contracts for a maximum of 350 high-speed, maneuverable, 26-foot watercraft and a potential 80 naval boats for force protection in 32-foot models.

“Metal Shark has enjoyed strong support from the State of Louisiana, from the Louisiana Economic Development office and from Governor Jindal,” said Metal Shark Boats President Chris Allard. “The cooperation and the pro-business attitude we have experienced, combined with the region’s skilled workforce and strong boatbuilding tradition, were key factors in our decision-making process for this expansion. South Louisiana provides the perfect climate for American manufacturing, and the decision to continue our investment here was an easy one.”

While continuing to expand production in Jeanerette, the company will install a 150-ton marine travel lift in Franklin, supporting its capacity to build boats of up to 250 feet in length in the future as it responds to growing demand from the offshore oil and gas industry as well as other markets. In addition, the company is reintroducing its legacy line of Gravois recreational aluminum boats and will adapt some Metal Shark hulls for the recreational market.

“We are thrilled that a great local company with an international reach like Metal Shark Boats has been chosen to receive this honor,” President and CEO Mike Tarantino of the Iberia Industrial Development Foundation said. “It is a true testament to the hard work and commitment to quality manufacturing by Metal Shark and its employees, and it’s yet another indication that great things are happening right here in Iberia Parish.”

“This is a great expansion for Metal Shark Boats,” said Director Frank Fink of the St. Mary Parish Office of Economic Development. “They will be creating an initial 60 new jobs here in St. Mary Parish, and their location on the Charenton Canal provides them access to the Gulf and open water for the larger vessels they’re building. We’re looking forward to having them as new residents in our parish, and we’ll be setting up specialized training to help them in the transition. They’re a very aggressive company, and we welcome them to St. Mary Parish.”