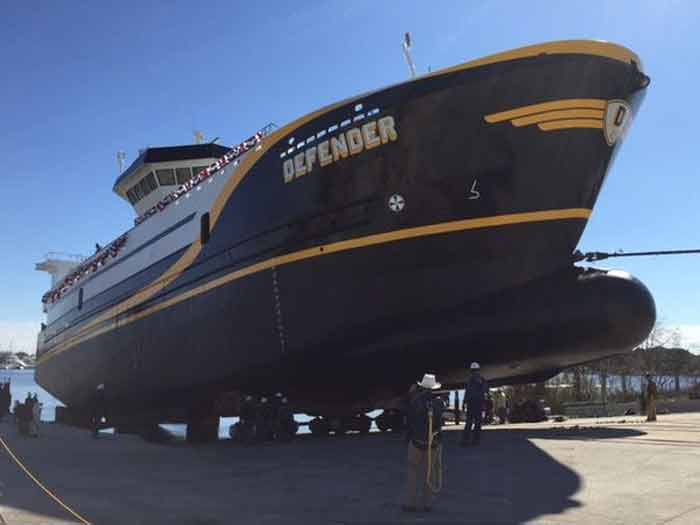 Because the vessel was being converted from fishing work on the East Coast (herring and mackerel) to West Coast fishing (pollock), a new fish pumping system was installed on the stern and a new full forward, sheltered fish distribution room was constructed for protection during the fish sorting process. Both changes make the vessel better suited for the operations and weather of her new Alaska fishing assignment.

Structural work included: a stern extension, bulbous bow with refurbishing of the thruster, whale back bow cover for the refurbished anchor windlass, an anti-roll tank, aft decks and bulwarks.

Once the work was completed, a renaming ceremony took place to change the vessel’s name from Western Venture to Defender.

The vessel was then relaunched and sea trials are scheduled for March, just prior to her 5,200-mile trek to Seattle, WA, for final delivery back to Global Seas in time for B season fishing in the Bering Sea.

“Jensen built its early reputation one fishing vessel at a time,” said Johan Sperling, vice president, Jensen. “While we were originally known throughout the Northwest for designing ‘functionally elegant’ vessels of all sizes that were distinguished by their endurance and an ability to stand up to anything the rough waters of the North Pacific could dish out, today we’ve set the standard for the entire commercial fishing industry. Both Global Seas and Patti Marine are longtime customers of ours and we were happy to work with them on this latest conversion.”