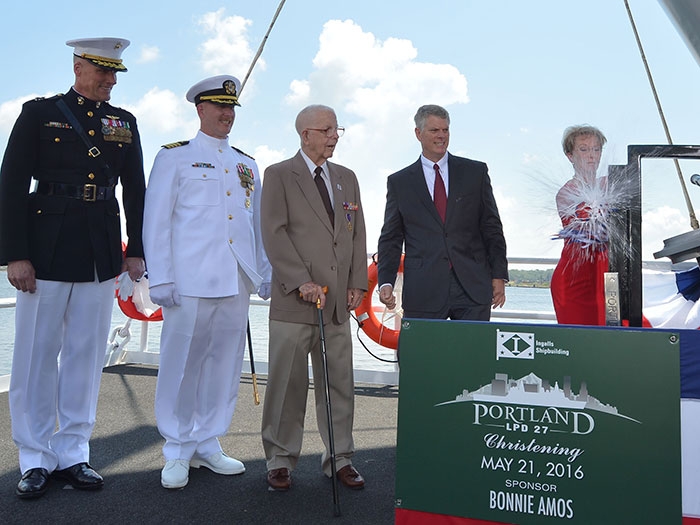 “Marines love these ships,” saidU.S. Marine Corps Maj. Gen. Christopher Owens, director of the U.S. Navy’s expeditionary warfare division, in his keynote speech.  “They are perhaps the most versatile ships in the fleet.”

Bonnie Amos, wife of retired Marine Corps Commandant Gen. James Amos, is the ship’s sponsor and smashed a bottle of sparkling wine across the bow of the ship, officially christening Portland.

“Today is about Ingalls shipbuilders,” she said. “Today is about the pride in what has transpired to make this ship, LPD 27, the greatest ship and the best in her class.”

Ingalls has delivered 10 San Antonio-class ships to the Navy with the most recent, John P. Murtha (LPD 26), delivering on May 13.

Ingalls has received more than $300 million in advance procurement funding for the 12th ship in the class, Fort Lauderdale (LPD 28).

“Portland is the 11th ship in the San Antonio class, and she is the best LPD to date,” Ingalls Shipbuilding President Brian Cuccias said. “Working closely with our Navy partner, we continue to improve on each ship we build. We’re investing, along with the great state of Mississippi and the Navy, in modernizing our facilities. Combine that with a hot production line and our talented and experienced shipbuilders, and we are uniquely positioned to provide our country with the highest-quality, most capable ships in our Navy’s fleet.”

LPD 27 is the third ship named Portland. The first USS Portland (CA 33) was the lead ship of a new class of heavy cruisers. Launched in 1932, it was named after the city of Portland, ME, and saw battle during World War II. The second USS Portland (LSD 37), an amphibious landing ship commissioned in 1970, was named after both Portland, ME, and Portland, OR. She completed 14 deployments to the Caribbean, Mediterranean and North Atlantic.

The 684-foot-long, 105-foot-wide ships San Antonio class are used to embark and land Marines, their equipment and supplies ashore via air cushion or conventional landing craft and amphibious assault vehicles, augmented by helicopters or vertical takeoff and landing aircraft such as the MV-22 Osprey.