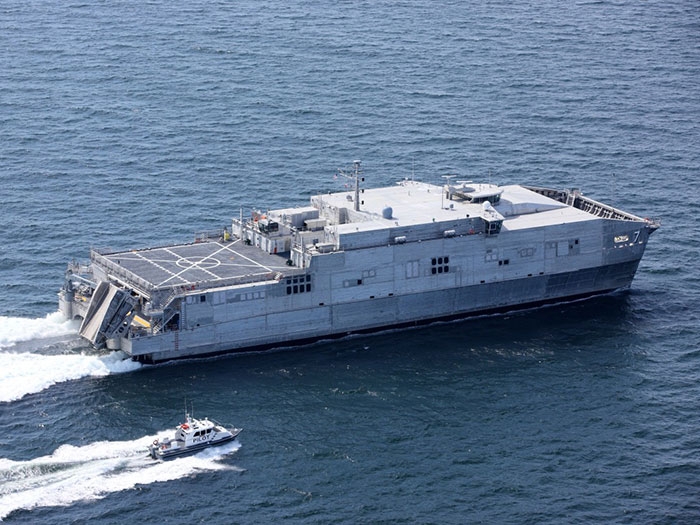 JUNE 8, 2016 — The future USNS Carson City (EPF 7) successfully completed Acceptance Trials during an underway period in the Gulf of Mexico, May 25-26.

The Navy’s Board of Inspection and Survey (INSURV) boarded Carson City for Acceptance Trials to examine and evaluate the ship for delivery to the U.S. Navy.

The readiness of the ship is demonstrated by conducting numerous tests both dockside and underway, says PEO Ships, noting that the purpose of such thorough testing is to ensure the Navy receives a fully functional, safe, and capable ship.

After delivery of EPF 7 later this year, shipbuilder Austal USA will deliver a further three expeditionary fast transport vessels from its shipyard in Mobile, AL, under a $1.6 billion, 10-ship block-buy contract with the U.S. Navy. Final assembly is well underway on Yuma (EPF 8) and modules for City of Bismarck (EPF 9) are under construction in Austal’s module manufacturing facility.

“Acceptance Trials are a major step towards delivering Carson City to the Navy,” said Capt. Henry Stevens, Strategic and Theater Sealift Program Manager, Program Executive Office, Ships. “The ship performed very well at Acceptance Trials, which is a great reflection of the hard work of our contractor and government team’s commitment to delivering quality ships.”

“This is further evidence of the level of maturity that the EPF program has reached,” David Singleton, CEO of Austal, said. “The U.S. Navy’s acceptance of our seventh EPF is a significant milestone for Austal, as the innovative platform continues to gain attention and praise from forward deployment around the world. The growing EPF fleet is adding great value to both U.S. Navy and U.S. Military Sealift Command (USMSC) operations and with the unique ability to transport troops, vehicles, equipment and cargo quickly and cost effectively, is truly redefining naval capability.”