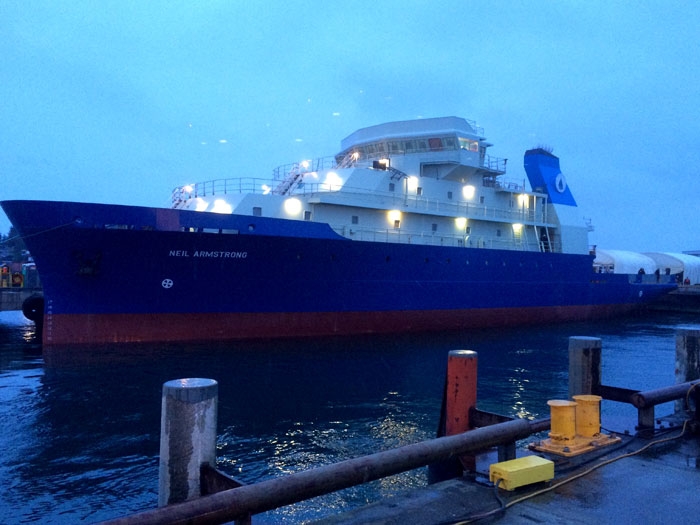 Both 238 ft x 50 ft ships were designed by Seattle-based naval architecture and marine engineering company Guido Perla & Associates (GPA) and are being built for the U.S. Navy’s Office of Naval Research (ONR). R/V Neil Armstrong will be operated by the Woods Hole Oceanographic Institution, and R/V Sally Ride will be managed by the Scripps Institution of Oceanography under charter party agreements with ONR.

Throughout the engineering and construction process, GPA has worked closely with the shipbuilder and various major suppliers to produce vessels meeting all stringent operational requirements.

Both vessels, designed and constructed in line with GPA’s principles and methods, meet the latest standards in shipbuilding technology, complying with the highest safety standards and providing unparalleled capabilities for advanced oceanographic research.

The vessels can carry sufficient supplies and support systems to stay at sea for up to 40 days, covering up to 10,000 nautical miles and withstanding high sea and wind conditions.  These capabilities, combined with the ability to operate 75% of the time during the Pacific Northwest and North Atlantic’s winter months and powerful ocean exploration equipment and instrumentation, will provide for superior operations.

“Similar to the space program at that time, the launching is a small step in the process of developing this vessel but once the vessel is delivered and set in operation, it will be a giant leap in technology for the scientific marine community,” says Guido Perla, Chairman of GPA. “As we do with every project, we emphasize that each accomplishment during the development and construction of a vessel is based on the hard work and dedication of each person involved, on merging expertise and experience and on good communication and planning.  We are honored to design these prominent vessels and would like to thank all dedicated partners for their continuous support,”

Delivery is scheduled for late 2014 for R/V Neil Armstrong and early 2015 for R/V Sally Ride.   Both vessels will be supporting scientists with ongoing research worldwide, including in the Atlantic, Western Pacific and Indian Ocean regions in a wide variety of missions.