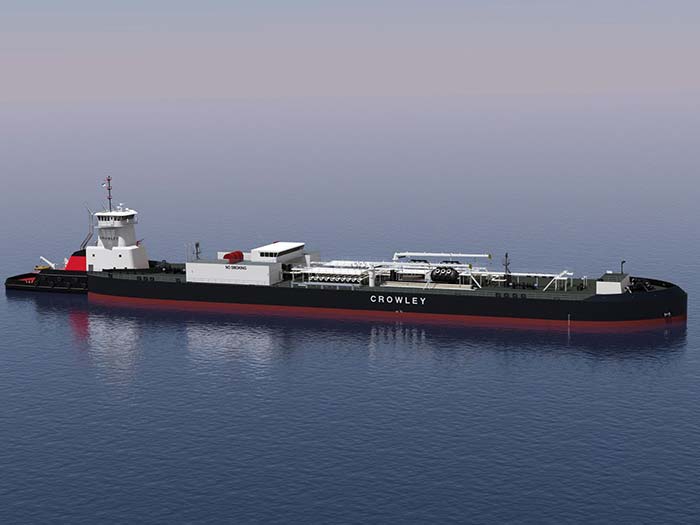 The Alaska class vessel will be built at Bollinger Marine Fabricators Shipyard, in Amelia, LA, with an expected delivery scheduled for the fourth quarter of 2019. The contract with Bollinger includes an option to build a second ATB.

Crowley’s marine solutions group has been contracted to provide vessel construction management services in the shipyard from final design phase through to delivery.

Once built and deployed, Crowley will operate the ATB under a long-term charter with Alaska-based Petro Star Inc., a wholly-owned subsidiary of Arctic Slope Regional Corporation (ASRC). The charter extends Crowley’s long partnership with ASRC, which dates back four decades to ASRC’s earliest days.

ASRC is owned by and represents the business interests of its approximately 13,000 Iñupiaq shareholders.

“While Crowley has operated ATBs in Alaska in the past, this will be the first ATB of its size and class that will be dedicated to the Alaska market,” said Rocky Smith, Crowley Fuels’ senior vice president and general manager. “The vessel’s capabilities make it ideal to serve the market with the safe and reliable service Crowley has built its reputation on. We look forward to working with our partners at Bollinger to deliver a world-class ATB to this region.”

The barge will be named Oliver Leavitt, in honor of ASRC’s former chairman and current member of the corporation’s board of directors, with the tug bearing the name Aveogan, Leavitt’s Iñupiat name.

“We’re honored Crowley has chosen to name the barge after one of the Corporation’s early leaders,” said Rex A. Rock Sr., ASRC president and CEO. “Crowley continues to be a vital partner and we look forward to commissioning this new ATB as an integral part of our transportation network as we deliver fuels throughout Alaska.”

Other design innovations include a barge form factor to achieve high-cargo capacity on minimal draft.

The tug has azimuthing drives to enhance maneuverability, and an Intercon C-series coupling system with a first-of-its-kind lightering helmet and barge ladder wave design.

The tug is equipped with fire monitors and foam proportioner, providing off-ship firefighting capabilities to the barge.

The barge features deep-well pumps in each cargo tank, as well as all-electric deck machinery to reduce the risk of hydraulic spills. The barge is also outfitted with spill response gear and two hydraulic boom reels with inflatable booms to support spill response efforts.

The ATB has been designed to SOLAS requirements and it will be ABS classed.

The vessel will be built with enhanced features to benefit the crew, including 45-degree sloped staircases, interior sound deadening and staterooms with bathrooms.