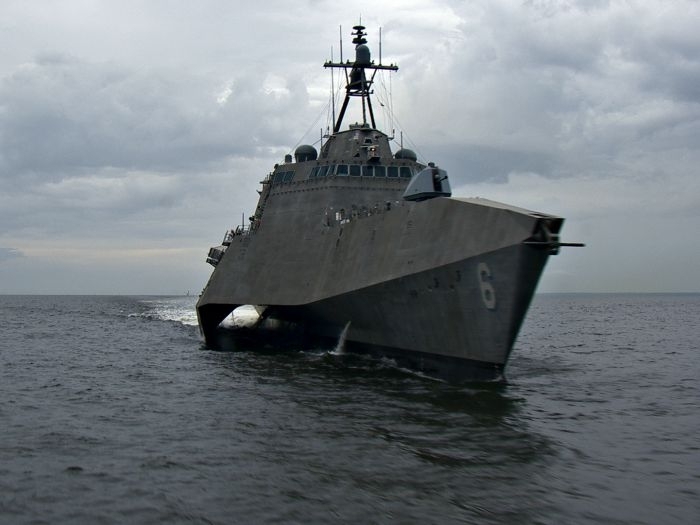 Austal LCS: Alabama congressmen have been quick to go public against effort to trim the program

DECEMBER 17, 2015 — Congressional supporters of the Littoral Combat Ship are coming to its defense within hours of defense media reports of an intense internal battle between the Navy and Secretary of Defense Ash Carter over the future of the program.

According to a story by Christopher Cavas in Defense News, Secretary Ash Carter, in a Dec. 14 memo to Navy Secretary Ray Mabus, [download the memo HERE] told the Navy to “reduce the planned LCS/FF procurement from 52 to 40, creating a 1-1-1-1-2 profile, for eight fewer ships in the FYDP, and then downselect to one variant by FY 2019.”

That would eliminate either the Austal LCS variant, built in Mobile, AL, or the Lockheed Martin variant built by Fincantieri Marine Group’s Marinette Marine shipyard in Marinette, WI.

Secretary Carter wants the Navy to use the money saved for more aircraft and missiles.

Congressman Bradley Byrne, a member of the House Armed Services Committee, said: “The United States is threatened by multiple adversaries, from China’s efforts to dominate the sea lanes in the South China Sea to Russia’s initiatives in the Black Sea through its seizure of Crimea, and to Iran’s attempts  to choke off lanes into the Persian Gulf.  Our Navy is at risk across the world and the weak and impotent Obama Administration seeks to further undermine our position with this ill-considered decision.

“Make no mistake about it, from Mobile to Marinette and from San Diego to Jacksonville, the bell has rung, and those in the Pentagon need to hear that this will not stand.  Not just for our shipyards, but also for our Navy and for the defense of the people of the United States of America.”

Senator Shelby, a senior member of the Senate Appropriations Committee, said: “The Obama Administration has once again demonstrated that it is tone-deaf when it comes to national security with this reckless proposal.  The LCS is critical to our Navy’s ability to respond to current and future threats across the world, and we cannot threaten our military’s ability to execute future operations with this powerful warfighter.

“Now more than ever, we must strengthen our military presence around the world—not weaken it.  Let me be clear: I will fight tooth and nail against this misguided attempt to needlessly undermine the security of our nation and the American people.”

Senator Sessions, a senior member of the Senate Armed Services Committee, said: “This would be a monumental error and must not stand.  It would overrule the long-settled priorities of the Navy. The LCS has been a top priority for the Navy for almost 20 years, has been supported by the last six Secretaries of the Navy and every Chief of Naval Operations since Admiral Vern Clark, and has had strong bipartisan Congressional support every year. This is troubling not just for the 4,000 hardworking Austal employees in Mobile, but also for the future of our Navy and our national security. The Navy and DOD have for years praised LCS as crucial to our future naval warfighting capabilities, and a necessary component of the surface warfare community.

“The Navy has, for many years, stated its goal of building up its capacity to 308 ships.  We are currently at only 282 ships.  Cutting LCS procurement to just 40 ships will make the Navy’s 308 ship goal impossible to achieve, as the only alternatives to LCS are far more expensive to produce and maintain. Indeed, little of the savings would be applied to other ships.

“LCS is crucial to our country’s future naval capabilities, and the 52-ship requirement is essential to get our Navy to the numbers it needs.  I intend to fight against this proposed reduction, and I will continue to fight for LCS.”