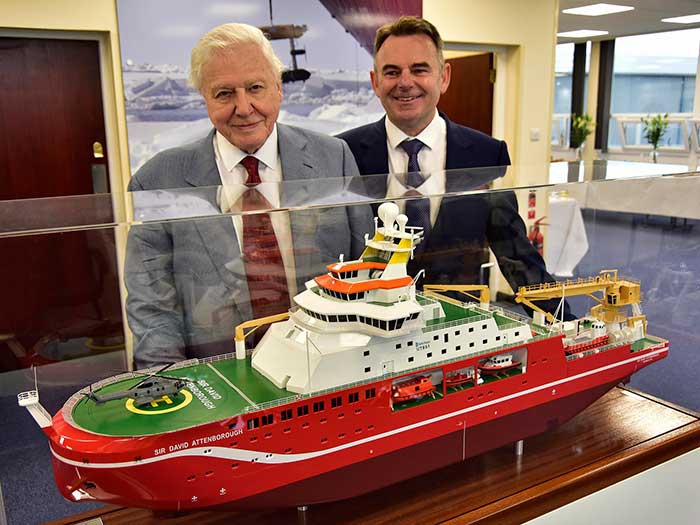 OCTOBER 17, 2016 — U.K. shipbuilder Cammell Laird today held one of the biggest ceremonies in its history when naturalist and broadcaster Sir David Attenborough joined more than 1,000 people at its Birkenhead shipyard for the keel laying of a new £150 million ($183 million polar research vessel that will bear his name.

Sir David initiated the lifting by crane of the first hull unit on to the construction berth. This unit, weighing around 100 tonnes, includes part of the ship’s keel and is the first of 97 units that will be erected to form the entire hull of the research ship.

“The RRS Sir David Attenborough, with Boaty McBoatface operated from her as a robotic underwater vehicle, will be one of the most advanced research ships in the world,” said U.K Universities and Science Minister Jo Johnson. “It will help inspire the next generation of scientists in the UK and build on our status as one of the world’s leading nations in polar science, engineering and technology.

When the ship sets sail in 2019, the RRS Sir David Attenborough will provide a research base to help scientists tackle some of the most important issues facing humanity, including climate change, future sea level rise and the impact of environmental change on marine life.

Speaking at the ceremony Sir David Attenborough said:
“It is an honor to be invited to take part in the keel-laying ceremony. The Polar Regions are not only critical for understanding the natural world but they also have an enormous appeal for journalists, broadcasters and the public.

“I have had several opportunities to experience the power of these places first hand. This new ship will ensure that scientists have access to these enigmatic regions to uncover secrets that we can only imagine at this point. Scientists working on this new ship will inform everyone about our changing world for generations to come.”

Cammell Laird CEO John Syvret said: “This magnificent ship provides a platform to showcase Cammell Laird to the world, to demonstrate we have the skills, the workforce and the facilities. Today marks a giant leap for Cammell Laird, we are dreaming big and building big again.”

Managing director Linton Roberts said the contract would secure jobs at Cammell Laird while a further 60 apprentices would be recruited during the project.

It has also recently reentered the newbuilding market.