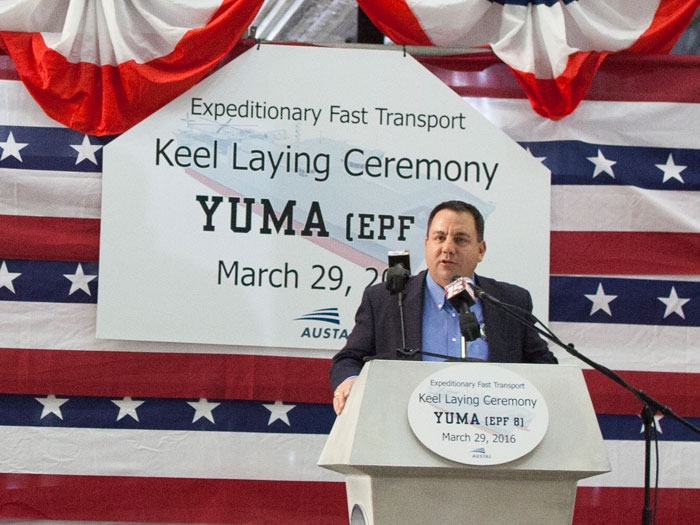 The ceremony marked the formal recognition of the start of the ship’s construction and Douglas Nicholls, Mayor of the City of Yuma, AZ, authenticated the keel at the ceremony by welding his initials onto an aluminum keel plate that will eventually be placed in ship’s hull. Mayor Nicholls was assisted by Austal USA A-Class welder, Courtney Cagle. Ms. Cagle began her employment with Austal in 2012 as an apprentice.

“I am excited to reach this significant milestone today in such a short period of time, considering we just launched EPF 7 from this bay in late January.” Austal USA President Craig Perciavalle said. “The momentum we’re experiencing on the construction of this amazing ship is evidence of the strength of Austal’s EPF program, and the continued success displayed by Austal’s talented shipbuilding team.”

The EPF program at Austal is progressing rapidly.  USNS Brunswick (T-EPF 6) was delivered in mid-January and there are three other EPFs under construction at the Mobile shipyard. Of the ships already delivered to the Navy, USNS Spearhead (T-EPF 1) is in Africa on its third deployment and recently took part in a successful anti-piracy operation. USNS Choctaw County (T-EPF 2) and USNS Millinocket (T-EPF 3) are also currently deployed supporting U.S. Navy fleet operations, including many international exercises.

Austal also has a 10-ship block-buy contract worth over $3.5 billion for the U.S. Navy’s Independence-variant Littoral Combat Ship (LCS) program. The company has delivered three LCS with another seven currently under construction. The future USS Montgomery (LCS 8) is scheduled for delivery later this year.