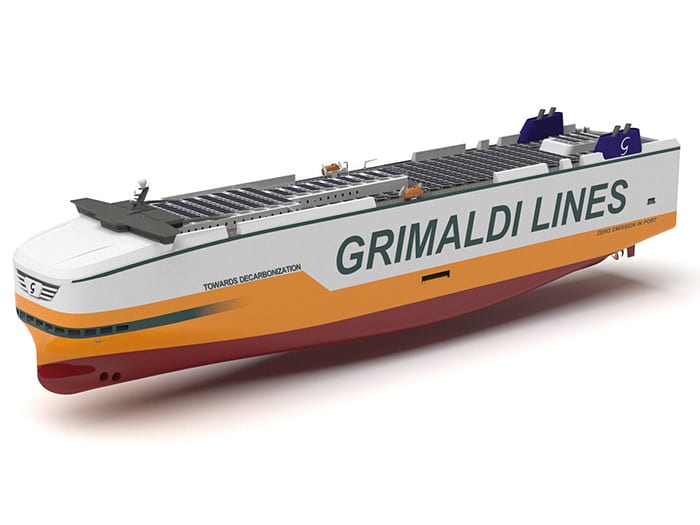 The concept of the newbuildings was developed by the Grimaldi Group in collaboration with Denmark’s Knud E. Hansen. [Image: Knud E. Hansen

The Naples headquartered Grimaldi Group is continuing its ammonia-ready car carrier shopping spree. Earlier this month, it added five newbuilds to its tally. On January 23, it added another five by exercising an option under an earlier contract with the China Merchants Heavy Industries Jiangsu shipyard. That brought the total number of car carriers ordered by the company in less than three months to fifteen.

The concept of the new buildings was developed by the Grimaldi Group in collaboration with Denmark’s Knud E. Hansen naval design and architecture studio. With loading capacity of over 9,000 CEU (Car Equivalent Units), they are designed to transport electric vehicles as well as fossil fuel vehicles. They will carry the Ammonia Ready class notation from RINA (Italian Shipping Register), which certifies that they are designed for eventual conversion for the use of ammonia as marine fuel.

Even before any switch to ammonia, the ships already incorporate multiple green features. They will be equipped with mega lithium batteries, solar panels and shore connection capability (cold ironing), which, where available, provides a green alternative to the consumption of fossil fuels during port stays. Other state-of-the-art technologies will include a hull air lubrication system, innovative propulsion and optimized hull design. Overall, the new ships will be able to cut fuel consumption by 50% compared to the previous generation of car carrier vessels.

The new PCTCs will be deployed on voyages between Europe, North Africa, and the Near and Far East to meet the new transport needs of automotive industry players.

“With our recent orders for the construction of new PCTC vessels, we’ve strengthened our long lasting and fruitful collaboration with China Merchant Industry Holdings,” said Grimaldi Group managing director Emanuele Grimaldi. “We’ve also reaffirmed our commitment to our customers, especially the world’s leading car manufacturers who continue to reward us with their trust. In this way, we’ll continue to live up to their high expectations and meet their evolving needs, with our offer of increasingly efficient and environmentally sustainable shipping services. Ten out of fifteen of our newly ordered car carriers will be deployed on the Far East trade and support the increasing development of China’s automotive industry.”

Grimaldi says it is vigorously pursuing the upgrade and renewal of its fleet, which currently numbers 130 ships deployed worldwide.

The ten vessels commissioned from China Merchants Heavy Industries Jiangsu will be delivered between 2025 and 2027. Overall, thanks to its recent investments totaling about $2.5 billion, the Group will take delivery of twenty-five new ultra-modern vessels over the next five years, including 15 ammonia-ready PCTCs (with option for another two units), six G5-class RO/RO multipurpose vessels, two GG5G-class hybrid RO/RO ships and two Superstar-class ROpax units (for its subsidiary Finnlines).